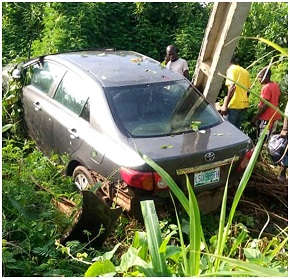 What could have resulted to another tragedy was averted during the weekend as ten persons whose identities were yet to be known escaped death in a lone accident at Omotosho Step Down axis on Ijebu-Ode-Ore Expressway in Odigbo Local Government area of Ondo State.

It was learnt that the crash was caused as a result over speeding of the driver.

The Unit Commander, Federal Road Safety Corps (FRSC) in Ore, Mr Sikiru Alonge, while confirming the incident told our correspondent that seven of the passengers, which included, two male adults and five female adults sustained varying degrees of injuries in the accident.

“The accident occurred because of overspeeding, but no live was lost in the crash,”Alonge said.

Alonge said the victims have been taken to a private hospital in Ore for treatment.

He, however, warned motorists to always maintain normal speed limit, shun over speeding and other regulations that violate traffic rules and regulation, which could lead to crashes.