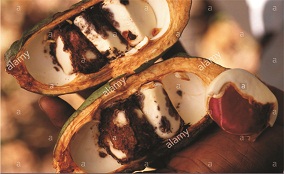 From Fisayo Akinduro, Osogbo
|
A 20-year-old man, Ayo Babalola has been arraigned before an Ipetumodu Magistrates’ Court, for allegedly stealing 10  kolanut pods.

The Prosecutor, Sgt. Jimoh Irewole told the court that the accused person unlawfully entered the two farms belonging to Mr Amusan James and Moses Onah with the intent to commit felony therein.

He added that the accused person also stole four bunches of plantain, valued N6,000, property of one Amusan James.

The accused person who was not legally represented pleaded not guilty to the three-count charge of conspiracy, entering and stealing.

Magistrate Habibat Basiru, admitted the accused person to bail in the sum of N100,000 with two responsible sureties in like sum.

Basiru ordered that the sureties must swear to an affidavit of means, reside within the court jurisdiction as well as produce three recent passport photographs each.

The case was adjourned till September 30, 2019 for hearing.