10 years after, Orlando Owoh lives on 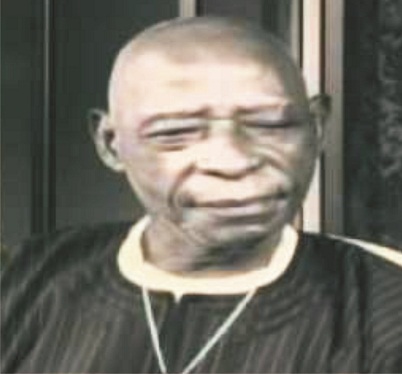 Ten years after the demise of Highlife Juju maestro, Dr Oladipupo Omoyela a.k.a Orlando Owoh, his centenarian mother, mama Morenike remembers with misty and sobbing eyes the loss of her famous son and exponent of Kennery Music, she spoke with TAIWO ABIODUN.

I weep while listening to Orlando’s Music on radio says Morenike, Orlando’s mother.

At 100years plus she is still agile as she could still walk briskly around and does not bend or use walking stick. She says she weeps when she hears her son, Orlando Owoh’s music on radio,  Taiwo  Abiodun  reports

On the wooden door of the bungalow is the carved artwork  of the late African Kennery, Owomoyela Oladipupo Olaore aka Orlando Owoh. Each time the centenarian woman, mother of the late musician sees the   carved wooden artwork   of her son, she feels sad. “I am always sad seeing this but I found solace in his Orlando’s  children and friends who are supporting me,” she said .

Mama Morenike lost her son, Orlando Owoh about 10 years ago after a brief illness.

One thing that cannot be taken away from the old woman is her neatness as her environment is clean so also the old woman is very neat showing evidence of good living. She   walked slowly and with dignity. Her sparsely decorated living room with sofas make the place  beautiful. She said “my son, I am always neat and my  children and Orlando’s friends take  good care of me  ”you should thank them on my behalf “.

Considering her   good stature, many guess that the old woman cannot be less than 100years of age while some doubted it but she declared” I don’t know my age but I know I am over 100 years. All my friends like Madam Eunice, Madam Adenike, Mrs Asagba, Madam Caroline Oladoyin, in fact, all my friends are dead, I am the only one remaining. That is why I am saying I want to go, there is nothing I am still doing on earth”.

How  I met Orlando’s  father

Asked how she met the late High Life musician’s father who gave him the nickname “Orlando,” the old woman said “His names are   Oladipupo Olaore   Owomoyela   Orlando Owoh, his father christened him ‘Olaore’  but I called him ‘Oladipupo’ .Mama  gave the reason why Orlando’s  father named  him ‘Olaore,’ she said “because my late brother Omoyinbo whom I was living with in Owo  was a friend to Orlando’s father   And he betrothed me to Orlando’s father.  I fell in love with him because he was from Ifon. So when he was born, Orlando’s father said he  benefitted   from  the friendship and called him “Olaore”. His friends called him ”Orlando” and it stuck on him.”

Orlando’s friends did not desert me

Mama has been very grateful to some of her late son’s friends who did not abandon her.  She said “Some of Orlando’s friends  did not desert  me. l just came from Die The Matter , Orlando’s childhood friend’s house who always give me food and money .Die The Matter has just dropped me at home now .Same with Oba Francis  Apata, who is the Olupe of Ipe. Oba Apata used to come to me and that is the chair he sits (pointing) whenever he comes here, not minding his status. Orlando’s friends did not abandon me, I am grateful and I hope and pray they will do same during my burial when I’m gone”.

Though she looks hale and hearty but she denied her look and said “I can no longer walk as usual, I am not living,” she said sobbing .

How Orlando got his Songs

According to Mama ,  the late musician did not inherit  the skill from his parents , she said ” I didn’t teach him how to sing , though  I was a  chorister  in a church but his own  was natural. And I remember that his father was a member of ‘ASINKO’ cultural music, and it is believed that, perhaps that was where he also  got it from, but Orlando’s music is more extraordinary because his music is quite different and unique”.

Where are Orlando’s wives ?

Mama who lives with some of her children spoke about Orlando’s wives and said  ” Some have gone to re-marry while I am still seeing some of them, and they have been very  nice  to me  while, those who remarried  have to move on”.

When does she feel her son’s absence?, the reporter wanted to know, and her response “I am always pained each time I remember him. I thought he was the one to bury me but it turned otherwise .It is painful .No woman will pray to bury her child”

Will Mama pray to have Orlando if she comes to this world again?! her response ” I wish to give birth to him if the opportunity comes again. I wanted to die when his death was announced .Even,I still feel like taking poison and die anytime I remember him. I remember how the bad news was broken by one of his sisters, I felt like dying , up till now I am not myself”.

I Love his songs

“I used to listen to his music on the radio, yes, he had a good voice while listening I would be crying. I love the song he  waxed for me in one of his records  that is “Ero ba mi ki yemi Morenikeji ye teja ….(greetings to my mother who is selling fish) I also love the  “Ojo” track, which is  among his most popular music he sang in  praise of “Ojo” , mama added  “He sang the song in praise of  Ojo who is a member of our  family .But I don’t know where he (Ojo ) is now”.

I tried to stop him from smoking hemp

Mama said she did not support her son smoking the substance, Indian Hemp (Igbo), she said “I used to advise him not to smoke Igbo but he  too used to argue that if he didn’t smoke it he would not have the energy to play and sing .I even went extra mile to prepare  agbo (herb) for him to make him stop it but he did not take the  concoction (agbo).

Bury me at the cemetery

Asked where she would like to be buried  after her death, mama said she preferred her church’s cemetery, “though my son, Orlando was buried in Lagos but I have told them that, when I am dead I should be buried at the  Church’s cemetery. I am the Iya Egbe of St Andrew’s Cathedral Church, Owo. My father, Jacob, was at the cemetery and Mama  Julianah who took care of me was also buried there .When I die I want to be buried at our cemetery in Owo but not to be carried to Ifon or anywhere”, she pleaded.

Speaking with his manager of over 30 years Mr. Samuel Olayiwola, (popularly known as ‘Musese’), the man who was  the late musician’s Manager went down memory lane.

According to Musese, “It was Osenepen ‘Orlando’s Manager before he died who announced the death of Orlando to me. I was devastated when I heard. Yes, he was sick but we didn’t know he would die soon”

Speaking about the Musician, he said “Yes, he used to smoke Indian hemp and I too used to help him pack  the illegal substance in my stockings when traveling, though I don’t smoke, even I don’t smoke cigarette not to talk of Indian hemp .Orlando did not smoke cocaine at all”.

He compared Orlando  with Fela and Bob Marley and said “no musicians living or dead has the temerity and courage they had”. He said though he used to assist the late musician in carrying the illegal substance .You see Orlando will not practise before he went to the stage, he was just a stage wizard”

On his travails, the heavily bearded man said he used to go to court with him during the Court days, he however added” we were going to court all the time but I can never forget the late Ooni of Ife Olubuse Sijuade, Oba Ipe (Apata), Die the Matter who were all supporters of the late musicians.

He said “Orlando has a secluded area in his studio , he would go to  smoke  when we were supposed to start by 9 pm, he would not come into the studio until around 2 am  and  he would sit down quietly with his guitar. He would not rehearse before playing on stage !”

He loved everybody, If he was going to eat, or  if you  tell him  you were coming he would ask  his wife to cook for many ,He would not eat alone .

On his smoking” I discovered that the smoking did not affect him, anytime he smoked he knew what he was doing.”

On his arrest and detention in Alagbon , Musese said “I was  in Kano when I read it in paper that a top musician was arrested for cocaine , I would have been taken away  if I were there for nobody would have believed I don’t smoke .. I was the closest person to him among his boys, Although I was his manager.  They went to ask him whether I smoke, but he only knew I drink.”

Manslaughter: Policeman who bags life jail says name on charge sheet not his

ANCOPSS and challenge of political relevance