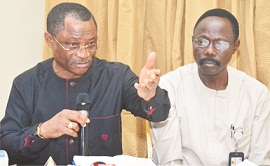 From Victor Akinkuolie, Ado-Ekiti
|
The Bishop of the Diocese of Ekiti West, Church of Nigeria (Anglican Communion), Rt. Reverend. Rufus Adepoju, has admonished the Federal Government to engage the services of  international negotiator in releasing Leah Sharibu, the remaining Dapshi school girls and other Nigerians in captivity of insurgents and kidnappers across the country.

The Bishop spoke at the Second Session of the 7th Synod of the church held at St. Paul’s Anglican Church, Erijiyan Ekiti, with the theme “Occupy Till I Come”

The cleric also urged the Federal Government to reconsider the recommendations of the 2014 National Conference Report on the creation of State Police.

He expressed worry over upsurge in violence and criminal activities in some parts of the country, advising the Federal Government to address the root cause of insecurity by providing employment opportunities for the teeming youths and bridge the gap between the rich and the poor in the society.

The religious leader further expressed dismay that there is no improvement in the nation’s health sector which engender medical tourism abroad by privileged Nigerians leaving the less privileged ones to their fate of making do with inadequate medical facilities available locally.

Similarly,  in a communiqué issued at the end of the synod the church thanked the Almighty God that Nigeria survived the potentially volatile general elections that held earlier in the year. The palpable fear of possibility of total breakdown of las and order was divinely averted.

Synod reiterated that politics is not a do- or -die affair and called on politicians to desist from heating up the polity for the sake of their political ambitions.

It challenged the three arms of government to respect the democratic principles of the rule of law and separation of powers.

In the communique, the Synod decried the heightened state of insecurity in the country where lives are lost in their hundreds on a daily basis through banditry, kidnapping  and terrorism.

According to the communique”Synod notes with dismay the admission by the Federal Government of Nigeria that some of these atrocities are perpetrated by arm-bearing foreigners who roam parts of the country freely.

“Synod continues to call for actions to ensure the release of Leah Shaibu, the remaining Chibok girls and others who have been held captive for years, even if it means engaging the services of international negotiators.

In the communique, the Synod lauded the efforts of the Federal Government of Nigeria in transforming the transportation sector with the ongoing construction of standard rail  lines across the country.

“Synod believes that provision of basic utilities would bring succour to ordinary Nigerians and calls on the Government to extend such gesture to other segments of the transportation sector, especially tarred roads.

“Synod applauds the Government on the increase in minimum wage from N18,000 to N30,000 and encouraged the urgent implementation of the new law by all concerned.

“Synod calls on the government to look into its policies on agriculture to curb the widespread use of hazardous materials in agricultural practices in Nigeria.

“The parlous state of the education sector in Nigeria gives the Synod serious concerns, especially as it notes the deplorable state of infrastructure in that sector”.

It urged government at all levels to declare a state of emergency in the education sector forthwith.

The Synod therefore urged government to pay more attention to the medical needs of all Nigerians.