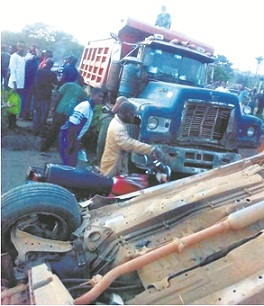 By Sade Adewale, Ondo
|
Two people lost their lives in an auto crash that occurred at Ife round about, Ondo.

Eye witnesses’ account told The Hope Metro that the tipper lorry, which was coming from the behind, rammed into the motorcycles  from the rear.

Officials of the Federal Road Safety Corp, in Ondo town were said to have rushed to the scene, where they rescued the other victims.

The Unit Commander in Ondo town, Assist. Corps Commander, Olarewaju Adewumi said, “five people were involved; that is four male adults and one female adult. Out of the people, two were dead this include female.

“Other three have been taken to Trauma Centre for treatment in Ondo town, while the dead bodies have been deposited at the General hospital mortuary in the town.

“The vehicle was coming from Akure garage and the cause of the incident is break failure and lost of control”, he stressed.

He said the tipper lorry and the motorcycles have been taken to the station for  safe keeping at the Vehicle Inspection Officer (VIO) inspection, while investigation is ongoing.