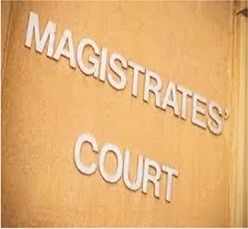 2 in court over alleged fraud

From Fisayo Akinduro, Osogbo
|
Two men, Timothy Oladimeji, 20, and Shola Emmanuel, 23  have been arraigned before an Ile-Ife Magistrates’ Court for alleged fraud.

Oladimeji and Emmanuel were alleged of committing the offence in June, 2019, around 12pm, at Oduduwa University, Ile-Ife

The prosecutor, Inspector Sunday Osanyintuyi, told the court that the  duo conspired to convert to their own use, the sum of N720,000 being transport money on two Boxer motorcycles with number plates FFE 703 QF and FFE 704 QF..

Osanyituyi said the accused persons fraudulently failed to remit the said amount realised from the use of the motorcycles to the owner, one Terry Onwuka.

The accused persons, however, pleaded not guilty to the three-count charge of conspiracy, fraud and stealing.

The defence counsel, Mr Dele Awominure, applied for the bail of his clients in most liberal term, while he pledged that his clients would not jump.

Magistrate Bose Idowu, granted the accused persons bail in the sum of N400,000 with two sureties in like sum.

She added that the defendants must swear to an affidavit of means, and adjourned the case till July 24 for hearing.