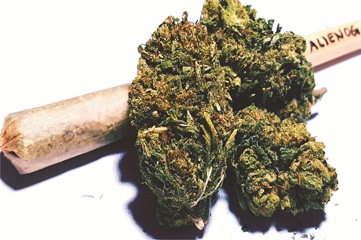 From Fisayo Akinduro, Osogbo
|
Two men, Godday Obi, 22, and Azum Michael, 19, have  been sentenced to five years in prison  each by a Federal High Court in Osogbo for being in possession of   3kg  of Indian hemp.

The convicts were arraigned on November 16, 2017 on a charge of cultivating Indian hemp at Ikeji-Arakeji in Osun.

The Nigeria Drug Law Enforcement Agency, NDLEA prosecution team, led by Mr Ogaga Azugo,  substituted the charge to possession of hemp, which he said  contravened Section 19 of the NDLEA Act, Cap No 30, Laws of Nigeria, 2004.

The defence counsel, Mr David Awoniyi, asked for leniency in sentencing his clients, saying they had learnt their lessons while in detention and decided to turn over a new leaf.

Justice Peter Lifu sentenced the duo after they pleaded guilty to the offence of possessing hemp.

The judge held that  after considering carefully the allocutus and testimonies of the prosecution, he discovered that the convicts were remorseful for their crimes.

“Also considering their ages, I am giving them five years imprisonment each, as against the minimum of 15 years, as deterrence to others, who are into illicit drugs,” he held.

He said their sentences should, however, begin from the day they were detained in  the custody of the National Drugs and Law Enforcement Agency (NDLEA).

Lifu instructed the NDLEA to destroy the exhibits recovered from the convicts.