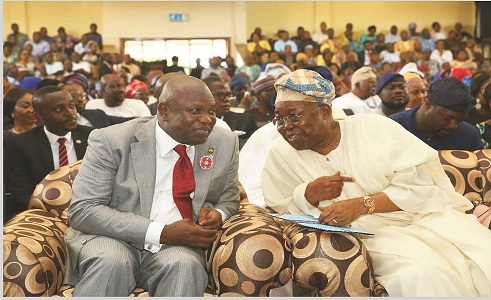 By  Samuel Alonge
|
Lagos’ acclaimed largest indigenous ethnic group, the Awori, at the weekend, issued a threat that it might withdraw its support for the ruling All Progressives Congress (APC) in the coming general elections, if the prevailing marginalisation of its indigenes is not addressed.

Giving the warning in a statement by the Awori Welfare Association of Nigeria (AWAN), in collaboration with Awori Concerned Elders (ACE), the group lamented that even now, its least slot of Deputy Governor in Lagos State had been taken away.

In the statement issued by AWAN and signed by its president, Chief Solomon Ayinde Ojolowo, the Awori warned the ruling APC, stating, “Our support should not be taken for granted, as we are critical stakeholders in our state, and nobody can shut us out from the toil of our forebears.”

Lamenting further, the AWAN stated, “We, the native people of Awori, the largest indigenous stock in Lagos State, hereby call the attention of the leadership of the ruling party controlling the politics, that the Aworis are not happy, being highly marginalised in the political scheme of our state.

“It will be recalled that all the three representatives of the state at the Senate are not from the state. One wondered if there were nobody among us that is qualified to represent us.

“Same goes for the Federal House of Representatives, not to talk of the State House Assembly where Easterners are representing us in making laws that affect us.”

It further stated, “The Awori Welfare Association of Nigeria, being the umbrella of all Aworis, Obas (traditional rulers), chiefs, towns, settlements, villages, clubs, associations, individuals in Nigeria and in the Diaspora is non-partisan; but where the interest of our people is being tampered with, we will be at the forefront to correct such.

“As a matter of fact, our fears are now more pronounced that we are not reckoned with in the scheme of things in the state.

“Perhaps, it is a ploy to deprive us of our own turn in 2023 to produce the governor of the state.

“We are aware that noting comes easy, as this cannot be given on a platter of gold; however, with the level of our support for the ruling party and for the fact that we have the largest voting population, we cannot be wished away.

“We, therefore, wish to call on those concerned that Lagos State cannot go the way of the Niger Delta, before the imbalance is addressed,” the AWAN complained.

The group, however, expressed appreciation to successive administrations in the state for reviving Lagos’ infrastructure “and promoting economic stability to the amazement of all other states and the world at large.”

It particularly commended the administrations of former Governors Lateef Jakande, Bola Tinubu, Babatunde Fashola and that of the incumbent, Mr. Akinwumi Ambode.