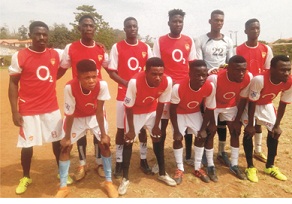 The grassroot football encounter between Rising Stars FC and Adeleke FC was decided at the Ijapo housing Field ,in Akure the state capital .

The encounter saw Owoade Emmanuel scoring the first brace of the competition in the 72nd minute and 84th minute to ensure his team have the maximum three points in the kitty.

During an interview with the sporting Hope Owoade Emmanuel said he was so excited to  score the goals that placed  his side on the top of their group.

He added that the  goals  came with the effort of team work ,saying the target of the team was to emerge over all winner of the competition.

“The glory belongs to the  team, I’m just fortunate to have been there on time as a striker and slotted home the goals for my team.”

The proprietor of Ijapo Kunle Tuface Football Promotion , Nigeria , Mr Ayokunle Oluwatope said the competition was put in place to take the youth  off social vices and to also discover new talents that will emplace the state where they really belong in term of sports among the comity of the state .

“He said, We are giant in grassroot football  development and we must ensure to take our rightful place by tapping into the numerous talents  abounds in nooks and crannies of the state.”

He adds: “We believed government cannot do it alone that is why we are collaborating  with the state Ministry of Youth and Sports Development including other individuals to take grassroot football development to a greater heights in the state.”