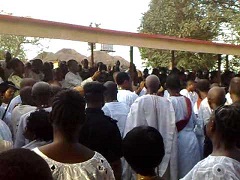 From Jimoh Ahmed, Owo
|
Owo still smarting from the coronation of the Olowo of Owo, Oba Ajibade Ogunoye is set for the annual Igogo festival.

Reports from the ancient town said the festival established by Olowo Renrengenjen in 1340 to commemorate his favoured wife, Oronsen who mysteriously disappeared from the palace begins tomorrow.

The Hope learnt that the festival would flag off with upeli procession on Thursday during which Iloro chiefs also known as Ighares would file in white garment procession to the palace.

The procession which begins at 4pm from Arigidi Quarters of the town through the market to the palace would be received by a High Chief who delivers a message from the Olowo signaling the commencement of activities heralding the Igogo festival.

Thereafter, the chiefs will pay homage to the Olowo, according to their seniority and in return the Olowo presents them with kola nuts and palm wine.

The festival in modern parlance is a festival of love in which Oronsen, the famed goddess of the festival is remembered and celebrated since it was established.

During the festival which lasts for 21days, the beating of drums is forbidden while the wearing of caps by males or head ties by females are strictly frowned at.