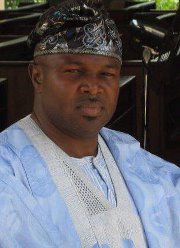 The Senator representing Ondo South Senatorial District, Senator Tofowomo , has said the Peoples Democratic Party has only two formidable governorship aspirants in Ondo South senatorial district.
Over 15 aspirants from Ondo South have indicated interest to contest the PDP primaries.
Senator Tofowomo who was elected on the PDP platform said the two formidable aspirants hail from Okitipupa and Ilaje local government areas.
Tofowomo who spoke in a chat with journalists in Akure said the PDP would win easily if it picks its candidate from Ondo South .
He stated that the coming out of 15 aspirants from Ondo South was a sign that the region was ready to produce the next governor of the state.
His words: ” I believe the party will do the needful to rally round one of the aspirants so that one of them will become the candidate of the party for the upcoming governorship election.
”I must say the two aspirants are meaningful aspirants, they have what it takes to become the governor of this state. They have done very well, they have moved around the entire 18 LGs. So we don’t have to beat about the bush, Ondo South is ready for the governorship election, and we are going to produce not only the candidate of the party but also the next governor of the state.
”My position has always remained that the governorship ticket of the party should be zoned to Ondo South. Our leaders should come together and make a meaningful decision by zoning the governorship ticket of the party to Ondo South.
”If you look at the last election, PDP had very meaningful results in Ondo South compared to other senatorial districts.
“The governorship ticket of the party should go to the South because the Central senatorial district had spent 8 years during former Governor Mimiko.
”So the leadership of PDP should not play games, they should be very formidable and upright. I’m speaking for Ondo South now, we are very ready for the governorship election and we would deliver a good result for the party if the candidate is featured from the district.
”The six local governments in Ondo South are very solid and I’m sure they are ready to produce a very good result. If the party zone governorship ticket to the South.