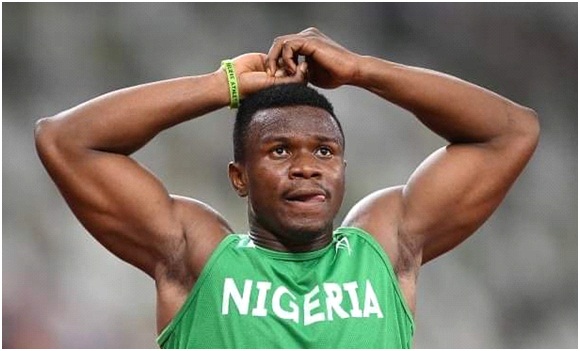 It was a sad end for Team Nigeria in Athletics as medal hopeful in men’s 100 meters final Enoch Adegoke missed the podium due to injury.
The Nigeria track star caught the attention of the entire world in weekend as he finished top in his heat with an amazing performance.
He also qualified for the final on Sunday after he came out in flying colours in the semi final and look ever ready for the final.
The final race was full of stars athletes and Adegoke was one of the bright talent to finish on the podium .
The race began with all the athletes trying to be on top but it was never meant to be for the Nigerian man as he pulled out of the race after sustaining muscle injury.
Meanwhile, Lamont Marcell Jacobs of Italy won the men’s 100 metres gold, breaking retired Jamaican star Usain Bolt’s 13-year hold on the event.
Jacobs, timed a European record of 9.80 seconds, with American Fred Kerley taking silver in 9.84 seconds.
Canada’s Andre de Grasse, a bronze medallist at the 2016 Rio Games, repeated the feat in 9.89 seconds.