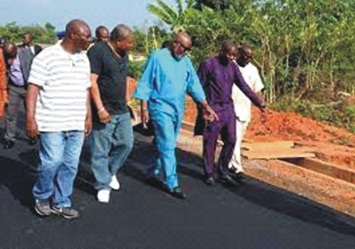 The Ondo State Commissioner for Economic Planning and Budget, Pastor Emmanuel Igbasan, has broken down the  2023 budget, with infrastructural development taking the largest chunk of the budget with N76,971 billion representing 27 percent.

He explained that the budget was prepared on the basis of inputs garnered from the people during the Town Hall meetings with various stakeholders across the state saying different stakeholders, including, farmers, market women, youths groups, professional bodies, persons with disabilities and organised private sectors were consulted.

Igbasan noted that the main focus of the budget was to attain financial resilience and sustainability through efficient, effective and sufficient revenue mobilisation and administration, and to optimize resources inflow nationally and internationally in order to expand the fiscal space.

“Safeguard lives and livelihood in a secure environment and stimulate rural economy and ensure shared prosperity.”

Analysing the sectoral breakdown, the commissioner noted that 155.15b which represents 56.22 per cent was allocated for the Economic sector, 8.53 per cent for the Administration sector, law and justice, 3.30 per cent while the social sector and the regional sector allocated 28.35 and 3.56 per cent respectively.

Some of the key capital projects to be carried out with the 2023 budget include the construction of rural roads through the RAAMP programme, reconstruction and renovation of primary school facilities through SUBEB, and rehabilitation of Owena Dams through the African Development Bank (AFDB) Water facility.

Others include dualisation of Shoprite- Oda town road, rehabilitation of township distribution network in the southern Senatorial district of Ondo state, the building of the High Court complex, construction of the new governor and deputy governor lodge, renovation of the House of Assembly and Completion of abandoned building projects.

He said, “Mr Governor has assured us that the budget would be logically implemented to further deliver the dividends of democracy and good governance to our people.

Also speaking, Commissioner of Finance,  Mr Wale Akinterinwa said the government is focused on the capital side of the budget which he said have more positive impact on the people.

“The analysis of the budget is there for everyone to see. The budget is very significant with the intention to ensure that everybody benefits from the budget.”

Meanwhile, Permanent Secretary in the ministry, Mr. Bayo Philip said Governor Oluwarotimi Akeredolu has set in motion the template to guide the operations of all arms of government in 2023 by signing into law the budget.

Why Nigeria not free from cholera yet