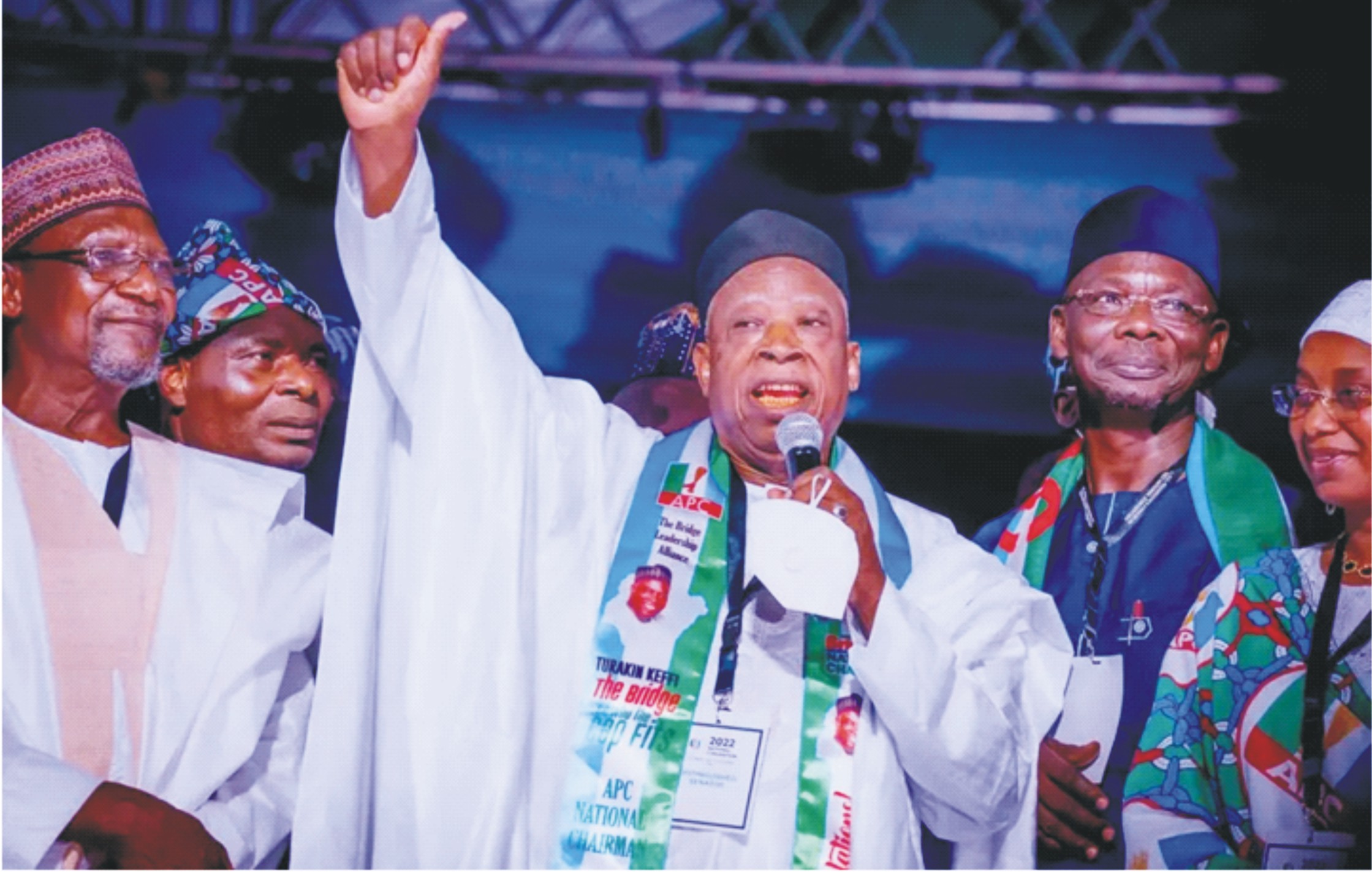 As official embargo on electioneering campaign in the fast approaching 2023 general election is lifted.  Thus, commencing in earnest an epic and most trying electoral battle ever known in the annals of the nation’s history can be likened or compared to political amagedon which will decisively alter both socio-political configuration of Nigeria.

At this material time, what is more germane and of paramount importance and indeed panacea for the unity and stability of the country is the political headship of the country i.e the presidency and what it entails in all ramifications.

The arrow head for Southern presidency is no less a personality than the executive Governor of Ondo State who incidentally is the current chairman of Southern Governors’ Forum, Arakunrin Oluwarotimi Odunayo Akeredolu, SAN.

He is a man of steel; imbued with stout constitution and a no-nonsense person of uncommon mould.  He is very transparent.  Indeed, our own Aketi, the governor is a round peg in a round hole on his well deserved and recent appointment as the co-ordinator, South West chapter of Asiwaju Bola Tinubu/Shetima Campaign Council.

As chairman, Southern Governors’ Forum, Arakunrin Akeredolu vigorously canvassed and singularly called for power-shift in the 2023 presidential election, insisting that only a Southerner should succeed President Mohammadu Buhari from the North on completion of his two terms of eight years as president.

What sauces for the goose sauces for the gander.  This is to preserve the unwritten arrangement of the rotational presidency between North and South, to remove suscipicion, mutual mistrust of domination and to actively promote sense of belonging in the polity.

Let’s in a jiffy in retrospect and cursory look at the past political misdemeanours or wrongdoings and make necessary amends to reconstruct bright future prospects for the entire citizenry and unborn generations.

Apparently, Nigeria started the on-going 4th Republic (1999 to date) on a good note looking forward to a brighter future anchored on the unity and stability of the country.

The former military head of state and later, elected president Olusegun Obasanjo under the platform of the People’s Democratic Party (PDP).  Obasanjo and his PDP was in the saddle for two terms of eight years in office.  He instituted two anti-graft agencies viz.  ICPC and EFCC to fight corruption in the public service and sanitized the augean political stables.

To   the chagrin and dismay of the people, corruption stank to high heavens.  To worsen the scenario, political gangsterism, mayhem and political violence was rife.  High profile politicians including the nation’s distinguished serving Attorney General and minister of justice Chief Bola Ige (SAN) gruesomely murdered which remain jig-saw puzzle in the realm of judicature.

Equally sordid, horrifying, reprehensible and despicable was electoral violence as bid for political office especially the presidency was regarded as a matter of do-or-die.

The ailing president, Umaru Musa Yar’dua who succeeded Olusegun Obasanjo proved his mettle to correct the infractions and restore orderliness in our electoral system through the implementation of white paper on Justice.  Uwais panel; and to promote the wellbeing and welfare of the people.

Alas, Musa Yar’dua sudden death put paid to the spirited and solo effort of the departed legendary leader and elder statesman to salvage and transform the country.

President Mohammadu Buhari led All Progressives’ Congress (APC) was massively elected in 2015 to stem the drift, corruption and rank mis-rule of almost two decades of the Peoples’ Democratic Party (1999-2015).

In spite of his foibles and shortcomings, people rallies round President Buhari based on the implementation of his 3 cardinal point programmes to secure, rid the country of graft and to reposition and fine-tune the economy for sustainable development.

However, as things stand in Nigeria, on the eve of 2023 general elections, all things are not equal.  To put it point blank, the economy is as good as dead, in utter comatose.  Corruption is still rife and poses intractable and treat to the survival of the country.

The proceeds accrue from the humongous hauls recovered by the Economic and Financial Crimes Commission (EFCC) and Independent Corrupt Practices Commission (ICPC) from the shameless and socially condemned looters of our public treasury are not well and manifestly utilized; and properly accounted for in the public domain for the sole benefit and advantage of the common man by way of free education, and fixing our industries and infrastructure to curb the spate of youth restiveness, banditry, kidnapping, ritual murder and insecurity all over the place.

Unfortunately, these public rogues of commonwealth are seen gallivanting around as heroes instead of being apprehended and treated as economic saboteurs, political hoodlums and common robbers to be ruthlessly and summarily dealt with according to the extant laws of the land.

Unfortunately too, in his valedictory speech at the 77th section of the United Nations General Assembly in New York, United States, President Mohammadu Buhari in candid lamentation about defects of democracy said interalia: “Certainly, democracy does have its limitations.  The wheels of democracy turn slowly.  It can demand compromises that dilute decisions.

Sometimes, it bends too much to special interests that exercise influence, not always for the general good, in a manner disproportionate to their members.  But it has been my experience that a democratic culture provides a Government with the legitimacy it needs to deliver positive change,” he enthused.

I vehemently disagree with the position of Mr. President In his farewell speech at UN forum, describing democracy as a slow process with its own limitations. His position runs contrary to the simple definition of democracy as a form of government which the governor administer themselves or elect representatives to administer them.

What now constitutes a drag, forlorn hope and unrealizable objective on the populist programmes of All Progressives Congress (APC) federal government is the perennial inability of President Mohammadu Buhari to walk the talk in his quest for good government. And  sheer capitulation to the barbaric dictates, whims and caprices of the notorious wicked cabal ensconced in the presidency.

Now the die is cast! Nigeria is said to be the most corrupt country in the West Africa sub-region. Either true or false or both, it is shameful on Nigeria as a thriving buoyant economy in Africa next to South Africa, and gratuitous insult and dent on the administration of the country to be compared with some banana republics like  Guinea Bisau, Somalia and war turned Sudan in the rank of corruption perception Index. We should all be shamefaced.

There is no need for any official denial of this blatant truth as the living standard of the people continue to drop and nose dive. We can behold an ugly side of bounteous plenitude in the midst of glaring misery, poverty and squalor amongst the suffering and traumatized hoipolloi.

As the whole electorate are donning caps of electioneerings proper, all hands must be on the deck on total mobilisaiton of the people especially the youths invariably used as cannon fodders but whose lots have ever at the receiving end and shortchanged over the years. This is as a result of the utter mismanagement, ignorance and lack of spiritual depth and moral incapacity of some of our rulers at the helm of affairs.

Down the ages, government is in place to provide for the well-being and welfare of the citizenry and for the security of lives and property. Government is a serious, earnest business that should not give room for frivolous and indolent persons to engage in pastime.

Neither is it intended to maximize profit in a business enterprise. Karl Marx (1818-1833), The German Economist and political philosopher propounded a theory and stated clearly that the struggle between the different social classes is the main influence on political change.

Lenin (1870-1921), with ideology coined after his name Leninism popularized communism as a basis for the proletariat i.e the working class and unskilled labour which constitute the core industrial workers at the receiving end.

In a broad perspective there are two distinct and clear cut ideological blocks to which Nigerians wittingly or unwittingly subscribe since the introduction of party politics in the country viz. capitalism and progressive block.

From the foregoing, our unstable fledgling political parties now jockeying for political office should inject sanity into our much vilified and rancourous party politics in a bid to stamp out from our political life the mad rush for filthy lucre without moral qualm.

Strategic and tactical role must be effectively played by progressive oriented political parties and all genuine stakeholders to mobilize Nigerian electorate to rekindle new hope in democracy based on justice, fair play, equity and egalitariansm.

On our own past and in conclusion, the contending political party which hankers on forming the next government come February 25, 2023 presidential polls must evince hard work, industry, discipline, fidelity and commitment to progressivism and welfarism premised on rigorous scientific planning of the economy to fix already dilapidated and criminal abandoned decrepit infrastructure.

This gesture of olive branch coming from incoming administration will gradually and surely restore confidence in purposeful and good governance.  And essentially, improve our social service viz, education, health, housing, electricity etal to be accessed at affordable cost to lift standard of living of the people heavily traumatized by the excruciating policies and programmes of government.

I wish the political parties and Nigerians a peaceful and fresh new lease of life in the electioneering.