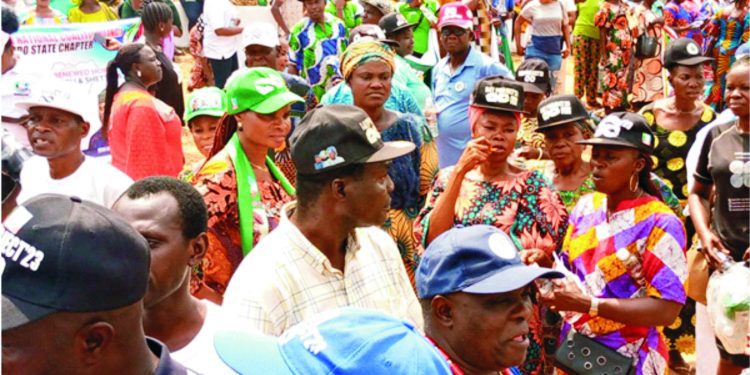 Several support groups at the weekend held a rally in Akure, the Ondo State capital to show solidarity and support for the candidacy of the presidential candidate of the All Progressives Congress (APC) ,Asiwaju Bola Tinubu and his running mate, Senator Kashim Shettima .

The walk, which had over 20 groups, started from M.K.O Abiola Democracy Park moved through Oja Oba road to Adegbemile Cultural Centre.

It was led by the Director, All Progressives Congress Presidential Campaign Council Support Group in Ondo State, Ambassador Victor Oritede.

Some of the groups that participated in the walk included, Original Omo’dua and Non Indigenes, Akure chapter, Coalition of Muslim Women for Asiwaju (COMWA), Progressives Nurses for BAT and Hausa Community among others.

Addressing the members of the various groups at Adegbemile Cultural Centre, Ambassador Oritede described Tinubu as a proper Nigerian and the right person Nigerians should give their votes to so that he can turn the country around as he did in Lagos State when he was the governor from 1999 to 2007.

Oritede described the candidacy of Tinubu in the forthcoming election as an opportunity for Nigerians to use his divine mandate which nobody can argue to renew the country.

According to him ” We don’t want 60/40 percent votes but 100 percent. To achieve this, we need to be united and work from unit to ward and state to deliver Ondo State for Tinubu.

The Organising Secretary and a member of the APC PCC Support Group in the State, Sanni Ahmed and Mrs. Prevail Ahmed respectively said Tinubu is a man of no tribe but Nigerian who is ready to work and serve in the interest of the country as the next president.

“Our message for the people especially women is the message of love. Asiwaju is not a Yoruba, lbo or Hausa man, he is a proper Nigerian. As a statesman, l believe the number of people seen here today shows how this man is loved.

“There might be discouragement here and there to weaken the strength and support of people for him, the walk was organised to boost the morale of electorate and residents of the state.

“We encourage people of the state not to drop the mobilization, zeal, passion working with from the beginning for Tinubu.

“You should standstill till the end so that we can have 100 percent votes for Asiwaju. Very soon Ondo State will be reckoned with, more than before,” they stated

On his part, the Special Adviser to the State Governor on Hausa and Fulani Matters, Malam Bala Umaru, said an average Hausa and Fulani person in the state had vowed to give votes to Tinubu as payback time for his support for President Muhammadu Buhari and other past presidents from the northern part of the country.

“In Ondo State, 98 percent of Hausas and Fulanis are for Tinubu. The massive collection of Permanent Voters’ Cards by Hausas and Fulanis is a challenge to indigenes as we are mobilizing in all nooks and crannies of the state and we are waiting for the day,” he said

Also, the State Co-ordinator, Progressives Nurses 4 BAT, Mrs. Patience Adamolekun, disclosed that this was the first time Nurses would declared their support for political contestant in an election due to the trust members have in Tinubu’s mandate and vision to turn the situation of the country around and improve the welfare of nurses in Nigeria.

The Alaja of lkare Akoko, High Chief Adebisi Abraham, pointed out that Tinubu as a courageous, analytical, visionary and team leader is needed by Nigerians at this critical time of the country to turn it around.

He appealed to Nigerians to vote for Tinubu as their choice presidential candidate for him to make the country liveable and a modern Nigeria with the God -endowed resources in the country.