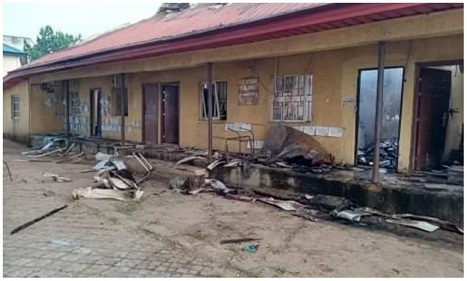 Political scientists have tasked the Federal Government, the Independent National Electoral Commission(INEC), and other stakeholders to arrest the spate of insecurity in the country in order to encourage massive voters turnout for the elections.

They also recommended creation of more polling units, more investment in voters education, timely provision of electoral materials to the polling units as strategies to improve turnout of voters.

Statistics from INEC showed that the turnout of voters across the country hovers around 30 percent to 35 percent of registered voters in the last two electoral cycles.

An Associate Professor of Political Science at Adekunle Ajasin University, Akungba-Akoko, Dr. Bayo Fasuwon urged Federal Government and INEC to address insecurity and other issues that might discourage massive turnout of voters.

He said many Nigerians do not have assurance that the election will hold due to several attacks on INEC offices and increasing rate of insecurity across the country.

He said: “We need to ask who we are voting for? Some people will be voting primarily for political parties while the question to be asked is how many Nigerians have voter cards? “

Fasuwon regretted that political parties have failed to provide issue-based manifestos that can encourage people to vote but rather only advertise their candidates.

“So the level of political education, which is used to encourage people to vote is not there. If people are going out en mass to vote, they are voting based on revenge rather than conviction. So if there is nothing to vote for, then what are you expecting people to vote for?”

“We also have to look at the proximity of voters to the polling units, which I think INEC is working on but let’s see how far it goes,” he explained.

The political scholar added that INEC should reduce queuing hours on the voting day to avoid voters staying long under the sun.

He further suggested that an electronic voting system can be adopted to improve voters turnout.

“If I can vote in the comfort of my home, then the issue of insecurity won’t be there and the issue of the voting center being too far away will be gone. There are many things like that to put in place before we can arrive at the system,” he noted.

He submitted that once the highlighted issues were resolved by the concerned bodies, people would encourage one another to vote.

Another political scholar at Edo State University, Dr Fred Ogbeide, observed that long history of electoral manipulation had discouraged a lot of Nigerians from voting.

He added that, “As a result of this, people now feel going to the polling unit is a waste of time as they know that their votes may not count.

“Second, you will discover that people go out to vote for a candidate they have so much trust in with the hope that if he win the election, things would turn out for good. But instead they became worse than the former.”

The political don recommended that INEC and other relevant stakeholders must properly educate the electorate and also ensure that votes count.

“Until the people see these assurances, I assure you on the election day, you will not see people coming out to vote,” he warned.

His colleague, Dr. Chris Oke also said low voters turnout for elections can be addressed if the people are convinced that there will not be electoral malpractices.

He also identified the current insecurity threatening the peace of the country as another factor that might cause voter apathy in the coming elections.

Oke, however, said the introduction of BVAS and other mechanisms initiated would drastically, if not totally eliminate electoral malpractices.

He said if these strategies are properly managed and insecurity is addressed, voters’ turnout for the elections would improve.