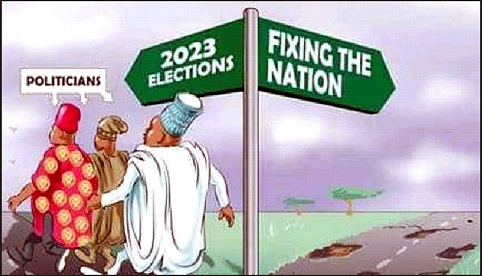 For good purposeful and sustainable democracy to thrive and flourish in Nigeria, the ongoing political experiment must be anchored and firmly rooted on clear-cut political philosophy or ideology not only to promote socio-political fortunes of the country, but to accelerate national development and enhance material happiness of the people.

It is now expedient on the ruling political parties in the country to evolve relevant and acceptable political ideologies either socialism or capitalism, just to mention the two well known “isms,” to articulate precise viable political arrangement; and modus operandi, to restructure the badly arranged practiced and ruptured federalism foisted on the succeeding civilian administrations on the eve of military hand-over.

The military dictatorship which handed over a failed constitution steeped in nebulous, violent, impracticable and visionless federalism must not be regarded as fait accompli.

The present generation of politicians should be up to the task and call off the bluff of our erstwhile military dictators and oppressors; and deploy stout political action and right ideology or philosophy to change the awful old and mocking narratives and re-write the history to conform to best practice of good government world over.

It is imperative for the politicians to bestir themselves from mental inertia and political  stupor; and be public spirited, intellectually formidable and imbued with political comprehension and spiritual depth to turn around the socio-economic and political fortunes of the people; and guarantee safety of lives and property throughout the length and breadth of the federation.

It is sine qua non for the ruling party to develop and declare an ideology or political philosophy as a panacea to all perceived political and economic ills of the society.

Perhaps, political party becomes the most reliable and virile instrument for promoting ideology.

For instance, Democratic socialism, a political philosophy articulated by Obafemi Awolowo of Action Group (AG) and Unity Party of Nigeria (UPN) was evolved to galvanize populist free education, social welfare programmes and other development schemes which put the western axis of the country on the frontline of development and far ahead the rest of Nigeria.

I must emphasize that Nkrumah fully utilized his political party, Convention People’s Party (CPP) in Ghana in truly mobilizing the entire hoipolloi which engendered groundswell support for his masses-oriented programmes and policies.

No wonder, the masses of Ghana almost deified Nkrumah as the political redeemer, the “Osaigyefo” of Ghana.

President Julius Nyerere could not be forgotten in a hurry by the toiling masses, the dregs of the society of Tanzania-Nyerere made humble and impactful contribution  through his “self help” (Ujumas) policy in transforming a great and vast majority of Tanzania masses who fervidly applauded him as “Nuralimu,” that is great teacher or “the giver of truth” to the point of hero-worshipping.

Briefly stated, ideology defines goals of public activity as national unity, social transformation and relations with other states. It alerts followers to injustices and to qualities in society deserving modifications of eradication, as Nehru’s socialist pattern of society which criticised casteism, social inequality  and religious backwardness.

Against this back drop, it is apposite to juxtapose, reflect on the defining political philosophy and the two universally acclaimed and popular ideologies viz, capitalism and socialism viz-a vis the one which is appropriate to address the socio-political and constitutional problems facing the country at this material time.

The constitutions of practically all Western countries confirm that capitalist ideology is the ownership by a few of the factors of production of these societies.

On the other hand, socialism has been to develop on the basis of self-reliance, proletarian and scientific planning. Socialism accelerates development, since the profits accrued by the productive forces in the society go into national coffers. These funds are chanelled to free education, free medical care, low-cost housing etc.

Under capitalism, such funds and profits go into private hands, thereby enabling a tiny minority to indulge in criminal  luxury, and ostentatious living, while the masses, the producers of the profits, are left to wallow in misery squalor, disease, superstition and abject poverty.

Since attainment of political independence in October 1, 1960, our politicians inherited an economy dictated by the whims, caprices and pleasure of British imperialism which was brazen capitalist-oriented pure and simple.

The politicians at the helm of affairs were bereft of correct ideological orientation and gross incapacity to manage and run independent and sovereign government. Those at the helm were buccaneers who pillaged the economy, the life wire of any nation, to the detriment of the nation and without giving respite forthe producers, toiling masses for the comfort of those few political and social vermins.

It is high time Nigeria as a sovereign nation, was extricated from the stranglehold of the neo-colonialists who are now commissioned agents and proxies of the ex-colonial master. Over the years, those neo-colonialists have profiteered immeasurably and munificently on our national wealth and resources leaving the rest of the country hewers of wood and drawers of water.

As a result of this naked self interest, painlessness and wicked interplay of capitalism, which is the basis of policy of laissez faire in government business, the increasingly growing population of have-nots and toiling masses are stinkingly impoverished, dejected and enlisted into an army of restive youths against the state.

To avert the cataclysm and imminent collapse of Nigeria as an indivisible and indissoluble political entity, the in-coming federal government should aggressively pursue socialist –inclined political ideology and philosophy premised on true practice of federalism, no matter whose horse is gored. There must be political will now or never!

According to Professor Akin Oyebade, a renown a professor of law and acclaimed political scientist, socialism has been to develop on the basis of self-reliance, proletarian internationalism and scientific planning. Suffice to say that imperialist wars, plunder, slave trade and gun-boat diplomacy are not inherent in socialist development.”

It is very pertinent to reiterate that federalism is the only basis on which the entire country, given its diversity and pluralism, could be effectively organized and governed on the formulae of linguistic affinity.

According to Chief Obafemi Awolowo, “The organization of the country into constituent states should be on a linguistic basis; provided however that  (i) no one or two states shall be so large in size and population as to be able to overrule the other states and bend the will of the federal government to their own and (ii) no other state shall be so small as to be unable to maintain its independence within the sphere of functions allotted to it.”

It stands to reason therefore that men and women of proven integrity imbued with right ideological and political philosophy, honesty, courage public spiritedness and comprehension must of necessity be at the helm to skillfully run the affairs of the great country at this crucial juncture of our nation hood.

The fears of mutual ethnic mistrust, suspicion and undue rivalries will be permanently obliterated and stamped out in the public life of the country, thereby giving fillip and momentum to greater cause of national integration, unity and progress devoid of corruption.

To lend further credence that federalism is the panacea for unity and progress of Nigeria, as a multi-racial, ethnic and religious nation. Professor K.C. Wheare, an eminent jurist and erudite scholar of international repute, candidly expressed constitutional view as follows:-

“Indeed, it is usually a matter of surprise that union is possible at all, among communities which differ in language, race, religion or nation.”

This is food for thought, to be pondered upon among the irredeemable ethnic irredentists who are congenitally chauvinistic to have a re-think on how we can ignominiously work out a suitable federal constitution for the United States of Nigeria for the unborn generations like the United States of America (US).