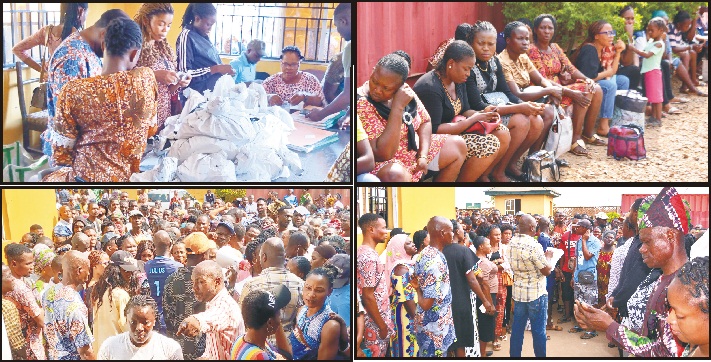 Investigation by The Hope showed that crowds of people in all the collection points trooped out to collect their PVCs.

INEC officials had a hectic task controlling the crowds who besieged the various offices early in the morning.

Ondo State Governor, Oluwarotimi Akeredolu had earlier declared yesterday as work free day for workers in the state to enable them collect their PVCs.

The large turnout of intending voters was said to be a demonstration of the interest of the people in the 2023 general elections.

At the INEC office, Oda road in Akure, people had assembled as early as 5.30am in their large numbers struggling to get their PVCs for an exercise that commenced at 8.am.

The registered voters, who spoke with The Hope, lamented the difficulties being faced during the collection of the PVCs, describing the process as cumbersome. However, many were unable to collect theirs.

They, therefore, appealed to the state government to extend the work free day to enable more eligible voters collect their voters’ cards.

They said they have been visiting centres designated for the collection of the PVCs but were unable to collect theirs as they were told that they were not available.

A registered voter, Mrs. Margaret Akinwumi, who was yet to collect her card expressed worry over the delay in the distribution of the PVCs.

She said the process was stressful as many have not collected their PVCs.

A registered voter at the INEC office in Akure South council, Pastor Ayoola Oluwatuwase, said the process was not encouraging as there was delay in the distribution.

The State Co-ordinator of a Non Governmental Organization, WE VOTE NIGERIA, Mr. Emmanuel Aje, pointed out that the collection was tedious because the registered voters failed to turnout for the collection of their PVCs during distribution at the ward level.

“That is why we have the crowd today, collection of the PVC at the ward level was faster but people refused to come for the collection then.

“During our visit to Akoko Southwest Local Government, PVCs were displayed without seeing their owners for collection,” he said

The HOD, Voter Education, Publicity, Gender and Civil Society Organisation of INEC, Mrs.Olufunmike Segun-Osifeso, said the commission was aware of the crowded registered voters at the local government offices of INEC for the collection of the PVC.

Ondo West Local Government of the INEC Office also witnessed large turnout of intended voters who showed up at the facility to obtain their permanent voters card (PVC) on Tuesday.

Some of those who spoke with The Hope expressed mixed feelings as they are happy to be given the opportunity to collect their permanent voters card but expressed doubt over the ability of the INEC officials to successfully distribute the cards in one day due to the huge crowd.

A resident, Mr. Nelson Adedokun expressed joy at the opportunity the public holiday has given him to get his permanent voter’s card ahead of the election and showed optimism that he would be able to get the card before the day ends.

Another resident, Mrs. Eniola Olanubi described how the public holiday has brought many people to the facility and what they are going through to get their permanent voter’s card as soon as possible.

Report from Owo said INEC offices across the six local governments in the Ondo North District, were yesterday besieged by prospective voters to collect what they called ‘License to vote’.

Majority of the people were mostly public and private office workers, who described the holiday given by the state government as an opportunity for many workers to collect their PVCs.

When The Hope visited some of the INEC centres in Owo, Ikare, Oka and Okeagbe, the places were jampacked with people waiting to collect their PVCs while staffers of the commission really had an hectic day answering them.

An Owo based veteran journalist and publisher, Elder Femi Olugbode commended staffers of the Independence National Electoral Commission, INEC, in the Owo Local Council, for their prompt and professional conduct in the release of the permanent voters cards to eligible voters who could not collect theirs in their wards.

A former Local Government Councillor from Irun Akoko, Salami Aiku, said the importance of PVC apart from elections cannot be over emphasized.

According to Aiku PVC is a recognized identity card one can use in operating bank accounts and other businesses, therefore, he and many others have used the holiday to collect theirs.

An INEC official at Okeagbe Akoko, who did not want his name mentioned, said the public holiday had positive effect on the PVC collection as people came out.

A prospective voter, Akinmadehan Oluwagbenga while speaking with our correspondent expressed delight at Government directive, saying the exercise will give room for the electorate who are yet collect their PVCs to collect.