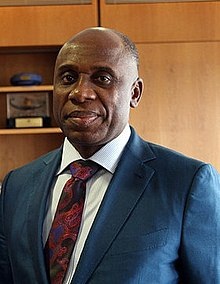 Ondo State Governor, Arakunrin Oluwarotimi Akeredolu, on Thursday declared that the struggle for the Southern part of the country to produce the next President must continue until it is realised.

Governor Akeredolu particularly noted that it is imperative for the people to vote for the candidate of the All Progressives Congress (APC), Asiwaju Bola Ahmed Tinubu in the spirit of fairness and equality.

The Governor explained that since President Muhammadu Buhari from the North is spending  eight years, then it is the turn of the Southerners to produce the president for another eight years.

Amaechi was in Akure for the Presentation of Staff of Office to Chief Olu Falae as Monarch of Ilu Abo in Akure North Local Government area.

Akeredolu disclosed that no loyalist of the APC can forget the principal role of Chief Amaechi as Director General and by extension the role he played for the party to be in government.

He appreciated the former minister for coming to Akure to honour Chief Falae, saying he has served Nigeria creditably well and the State is proud of him.

“Thank you for coming, Chief Falae has served this country creditably well, and we, in Ondo State, are very proud of him. He left from the Bank, he became the Minister for Finance and also served as Secretary to the Government of the Federation. So he has done his best and uptill now when he is less busy he will find time to advice us,” the Governor said.

Earlier, the former Minister of Transportation, Chief Rotimi Amaechi said this during his campaign for APC presidency ticket to Akure, he visited Chief Olu Falae who extended invitation to him that he will be presented Staff of Office as Olu of Ilu Abo.

He thanked Governor Akeredolu for recognizing and honouring Chief Olu Falae, describing him as one of the few Nigerian elites who is prominent, patriotic and served Nigeria diligently.

“Because of my campaign for Presidency, I knew Chief Olu Falae, we visited his house in Akure. So I came to visit Chief Olu Falae whom you have kindly recognized with the Panel report,” he added.

Amaechi lauded Governor Akeredolu for his leadership quality and for always being at the fore front of good governance in the country.