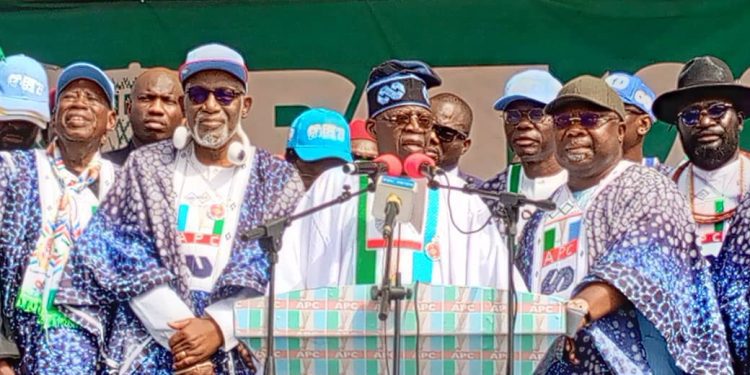 The Presidential candidate of the All Progressives Congress, APC, Asiwaju Bola Tinubu has vowed to develop Ondo Deep seaport in order to boost the economic fortune of the state of elected as

Tinubu also promised to work with Ondo State government in reviving all abandoned projects that will turn the state to manufacturing centre in the country if elected as president.

He stated this during his electioneering campaign in Akure, the State capital.

While commending the state governor, Oluwarotimi Akeredolu for his sterling achievements, he said Akeredolu has performed well particularly on cocoa plantation and in the area of industrialisation that will boost the economic fortune of the state.

“Governor Akeredolu has done well in turning cocoa seedlings to cocoa plantation and in the area of industrialisation in the state.

“The coastal area of Ondo, we will work together and make it a tourist centre. For proper and good things to happen in the country, we will definitely rehabilitate abandoned projects for the state to become manufacturing centre and fulfil promises of the past if l am given the opportunity,” he said

Tinubu,who emphasized that progressive governance can only be brought to citizenry through person who has governed in a progressive manner before said the presidential candidate of the Peoples Democratic Party, Atiku Abubakar is not progressives to do this.

“Instead, he would rather sell your birth rights to the highest bidder and his cronies and run off with the proceeds. His policy will provide you with nothing,” he stressed

He described the presidential candidate of Labour Party, Peter Obi as fake economist who claimed to do better for the country if elected as president.

According to him, Obi preferred to save money rather than invest on economy for the benefit of people of Anambra state when he was the governor of the state.

He said “Obi had a chance to be progressives when he was the governor of Anambra State but all he could do was to save money without investing in the future of citizens of the state.

“He refused to save people because he preferred to save money.”

Earlier, the National Chairman of the party, Abdullahi Adamu, called on members to give their votes to Tinubu and all candidates of the party contesting for various political posts in the 2023 general elections.

Adamu, who was represented by the National Secretary of the party, Senator Iyiola Omisore said the party has achieved a lot in health and power sectors among others which could be witnessed in Lagos and Ondo states.

This, he said would be replicated at Federal level when Tinubu is elected as the next president come February 25 to change the narrative of the nation.

Also, the Governor of Ondo State , Akeredolu charged the residents in the state to vote massively for Bola Tinubu and his running mate, Senator Kashim Shettima and other contestants under the platform of the party.