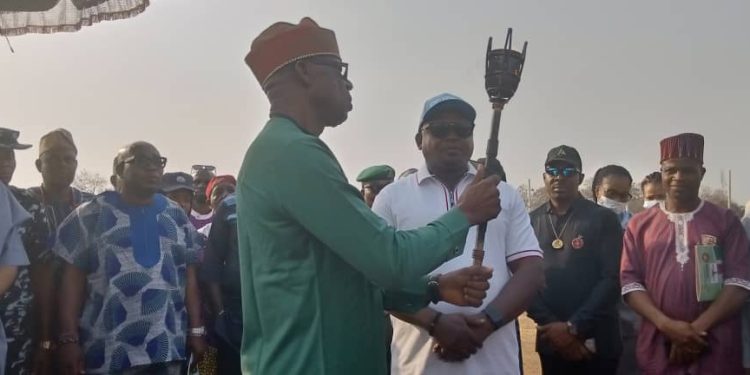 Akeredolu who was represented by Commissioner for Youth and Sports Development, Mr Bamidele Ologun said the current administration has put in place necessary security arrangement for adequate protection and maintenance of law and order through out the period of the games.

Governor Akeredolu noted that the sports is one the best means of meaningfully engage the youth positively, saying it also deepening development of human capacity, opportunity for talents hunt promotion of national integration and social cohesion.

He stated this during the opening ceremony of the 21st Polytechnics games and unveiling of ‘Oronsen’ as the official Mascot of the games.

The Governor charged all the participating institutions to compete in line with the rules of the games.

He thanked all the partner agencies and individuals that contributed to the hosting of the games in Ondo State.

Oronsen, being the most significant symbol of Owo culture and tradition was adopted as the iconic image by the host institution for NIPOGA tagged; “Owo 2022”

Oronsen was the beautiful Queen of Olowo Renrengenjen ,the 13th Olowo of Owo who relocated Olowo’s palace to its present location through the great wealth the Queen generated for him through proceeds of coral beads she magically bequeathed to him.

This became the source of his wealth through which he was able to create the largest Palace in Africa with about 100court yards.

In a chat with newsmen , the president of NIPOGA Council and Rector of Rufus Giwa Polytechnic Owo, Mr Adebola Gani Ogundahunsi thanked the visitor and the Governor of Ondo State Arakunrin Oluwarotimi Akeredolu for his financial support and his presence at the opening ceremony of the games.

Ogundahunsi said the presence of the Governor at the event was a manifestation of his administration commitment to the development of sports.

The Rector said the NIPOGA is organised to foster unity, peace and friendship among students ,staff and institutions.

He charged athletes to to see the games as an opportunity to showcase their talents in other to attract sponsor , urging sports administrators to use the arena to scout for talents as well as promote them in the quest to develop the youth and ultimately build the sports sector.

He said: Over 3500 athletes and their officials drawn from across the country county will feature in eight games which include; Athletics, Badminton, Basketball, Chess, Scrabble, Football, Table Tennis and Volleyball in the competition that will end of 21st of this month.”

The Olowo of Owo, Oba Ajibade Gbadegeshin Ogunoye III, said he was happy that the 21st Polytechnic Games is holding in his kingdom .

He charged all the participating institutions to imbibe the spirit of sportsmanship.