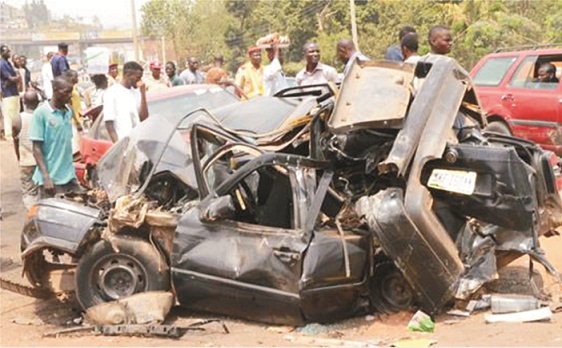 By Tola Gbadamosi
|
ared dead, while one sustained serious injuries in a fatal road crash which occured along Ode-Aye road, enroute Okitipupa Local Government Area of Ondo state at the weekend.

Also involved in the crash was one unregistered motorcycle owned by one Sogbon Jesubiyi.

It was learnt that the motorcycles had two passengers aboard, while the Golf car had one passenger.

The motorcyclist was said to be riding on top speed against traffic rules when he rammed into the other vehicles, thereby resulting into the death of three persons on the spot.

The victims were said to have been thrown off the bikes in different directions, such that one  38-year-old female pillion was crushed by an oncoming vehicle.

The woman, Funmilayo Oduwo from Ode-Aye community was said to have died on the spot at the wee hours of Saturday, following the accident.

According to police report , the injured passenger was immediately taken to Ibukun Oluwa private hospital in Ode-Aye for treatment, while the bodies of the deceased persons have been evacuated from the accident scene.