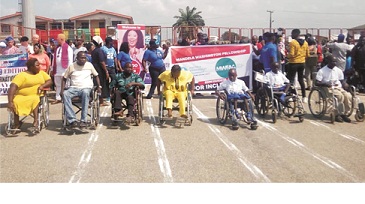 By Adekola Afolabi
|
Ondo state government said 30 of the people living with disabilities in the state have been given automatic employment into the state civil service by the state government and would get their appointment letters before Christmas.

Arakunrin Oluwarotimi Akeredolu,  made this known during a public sensitisation in commemoration of the world disabled day held in Akure, the Ondo state capital.

He added that government was already perfecting their administrative papers and that the present administration would continue to prioritise their welfare and give them sense of belonging.

Represented by his Chief of Staff, Chief Olugbenga Ale, governor Akeredolu said he would not discriminate against persons living with disabilities in the state, but would continue to do its best to improve their welfare.

The governor who congratulated and rejoiced with the disabled on their day, also assured them that their better welfare is his concern and that his administration would not fail in its responsibilities.

In their numbers, the people living with disabilities danced into the office of the governor to thank governor Akeredolu for remembering them in his government.

They carried various placards with different inscriptions such as; “Thank you Mr. Governor for giving us S. A in your cabinet”; “Thank you for the constitution of the Board of Agency and the appointment of one of us as Chairman of the Board.”

“Thank you for the approval of 30 of us for automatic employment into the civil service,”Arakunrin Oluwarotimi Akeredolu Governor of the year,” among others.

Also, the Patron of Persons Living with Disabilities, Ondo state chapter, Dr. Tunji Abayomi, applauded the State Governor, Arakunrin Oluwarotimi Akeredolu for having a listening ear to the requests of the disabled in the State.