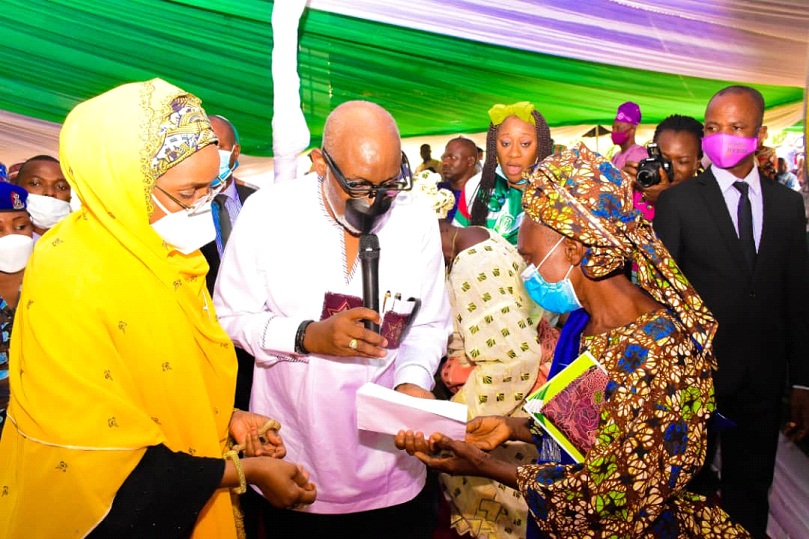 No fewer than 300 rural women in Ondo state benefitted from the Federal Government’s special cash grant to rural women, under the Federal Ministry of Humanitarian Affairs, Disaster Management and Social Development.
Speaking during the flag-off ceremony of the programme yesterday at the Government House Grounds, Akure, the Minister of Humanitarian Affairs, Disaster Management and Social Development, Sadiya Umar Farouq, noted that the Federal Government’s cash grant for rural women is one of the numerous social intervention of President Muhammadu Buhari led government aimed at uplifting the most vulnerable groups out of poverty and increase access to financial capital required for economic activities.
At the event, each of the 300 women went home with a grant of N20, 000 cash.
The Minister said the special cash Grant for Rural Women programme was introduced this year 2020 by the Ministry as part of President Mohammadu Buhari’s social inclusion and poverty reduction agenda, including the realization of the national aspiration of lifting 100 million Nigerians out of poverty in 10 years.
She added it was designed to provide a one-off grant to some of the poorest and most vulnerable women in rural Nigeria, saying a grant of N20,000 would be disbursed to over 150,000 poor rural women across the 36 States of the Federation and the Federal Capital Territory.
She particularly appreciated President Muhammadu Buhari and the Governor of Ondo state, Oluwarotimi Akeredolu, for their support towards the success of the programme.
The Minister who explained that since inception of President Muhammadu Buhari’s administration in 2015, government has been paying more attention to protecting and promoting the plight of the poor and vulnerable persons in the country, further added this informed the decision to initiate the National Social Investment Programme (NSIP) as a strategy for enhancing social inclusion of the most vulnerable segments of our society.
She added that since its introduction in 2016, NSIP has impacted positively on the lives of the poor and vulnerable in Nigeria as many of such people have had complete turn around in their lives.
According to her, transfer and grant which is one of the method used by the government to empower the poorest members of our communities was aimed at delivering timely and accessible cash transfers to beneficiary households to Improve household consumption and increase in utilization of health and nutrition services.
These payments are only for September – December, 2019 after which, the programme stopped due to the problems by the Payment Service Provider (PSP) with ICPC. This problems are being resolved and l assure the beneficiaries that the programme will resume in earnest.
Earlier, performing the flag-off ceremony of the programme, Ondo state Governor, Oluwarotimi Akeredolu, lauded the Federal Government for the initiative which he said would provide an enabling platform for women empowerment, tackling poverty and resuscitating the economy after a long period of privation engendered by COVID -19 pandemic ravaging the world.
Others are, Special Grant Transfer involving 1,084 women as beneficiaries from 65years and above, as well as 483 physically challenged persons who have received N20,000 on quarterly basis.
He said the State Conditional Cash Transfer took care of over 2000 women received N5,000 on monthly while Skills for job under Youth Employment and Social Support Operations engaged a large proportion of female.