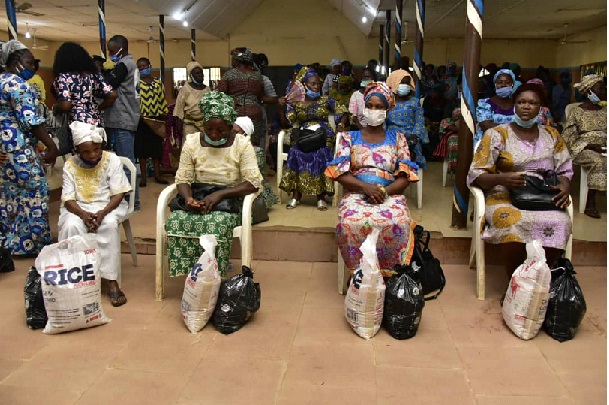 The ongoing distribution of palliatives to widows across Ondo state under the Ondowidows’care initiative of the wife of the governor, Arabinrin Betty Anyanwu-Akeredolu has covered the Central Senatorial district of Ondo State with no fewer than 3,000 beneficiaries.
The breakdown of beneficiaries according to local government areas include Akure South 1500, Akure North 250, Idanre 153 , Ondo West 449, Ondo East 75, while Ifedore had over 500.
Odigbo Local Government opened the Southern Senatorial district yesterday with over 400 beneficiaries.
At the venues of the distribution in Ondo West at the Oba Adesanoye Civic Centre and Odigbo Local Government headquarters Ore, widows commended the initiative, describing the gesture as one of its kind in the history of the state.
Speaking with The Hope in separate interviews, the beneficiaries thanked the wife of the governor for remembering them at this point in time, and urged her to continue with the initiative.
A beneficiary, Mrs. Olawanbi Fatima commended Arabinrin Betty Anyanwu-Akeredolu for the initiative, saying: “Since we have been having government right from the time of Alliance for Democracy, I have never witnessed this, they hadn’t remember widows like this, and I pray that the Creators of we the beneficiaries will support this government for providing food to feed our children”.
Mrs Olatinpo Olatunbosun, a 46 year-old widow whose husband died in 2011 disclosed that she had not been involving herself in programmes like this due to the level of rowdiness and disorderliness, but was amazed to see everything well organised without subjecting them to stressful experience before collecting the items.
The widows, who gathered in groups singing different songs composed in their dialect, confessed that they had never been recognised like this by past administrations in Ondo State, and demonstrated their unalloyed support for the reelection bid of the governor.
At Ore, Mrs Rebecca Akintelu said the initiator really tried for Ondo widows through the programme, saying the governor had performed creditably well in their local government.
Mrs. Sindikat Okunola said” I am very happy about this programme, I thank Arabinrin for this wonderful gesture and may God be with them”.
The exercise continues today (Wednesday) to Irele local government.