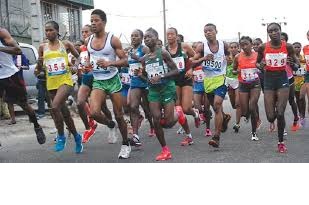 Victor Akinkuolie, Ado-Ekiti
|
No fewer than four thousand athletes from different parts of the country will be participating in the maiden edition of the Ikogosi 10km marathon race slated for 14, December 2019.

Speaking in Ado-Ekiti, during a press conference jointly addressed by the Commissioner for Youth and Sports, in the state,  Mr. Mike Awopetu and his counterpart from the Information and Value Orientation, Mr. Muyiwa Olomilua,  disclosed that the sporting  event which would hold around  Aramoko-Erinjiyan-ikogosi corridor was aimed towards promoting unity, advancing the  economy and for social interaction as well as to develop tourism potential of the state.

On the suspicion that undue interference and discrimination could mar  the selection process, Awopetu said  transparency would be upheld because it remains the  way to get  the best athletes from Ekiti that would shake the world.

He said the programme  was put together through  the initiative  of Governor Kayode Fayemi, to attract national and international athletes to the state.

Awopetu added that security will be deployed to monitor and protect the athletes, advising all interested participants to register free on www.ikogosimarathonrace.com website.

He  solicited the support of the corporate bodies  and the host communities for the success of the sport fiesta.

“Though, the race  will be held in Ekiti, but we won’t give Ekiti indigenes preferential treatment, because  that would amount to  corruption in the sports sector. If a man from Kenya or Tanzania wins, so be it.

“But it will expose them to the opportunity of rubbing shoulders with the best athletes across the globe and this can market them.

The Consultant of the initiative, Mr. Segun Labiran, said no corruption will be allowed in the selection of the  athletes, assuring that the process will be transparent .

“This is because athletes will  come all over the world to see the warm springs . There was a time the fastest man and woman in Africa were from Ekiti ,but it has not happened for a long time and this is the time to return to that era”.