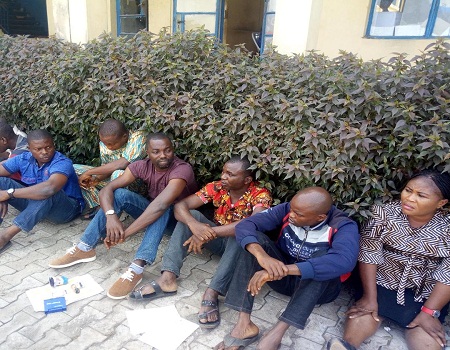 By Michael Ofulue
|
Five Ondo State civil servants who allegedly defrauded the government  to the tune of about N200 million were yesterday paraded by the Ondo State Police Command.

The suspects before their suspension worked in the Ministry of Finance, Internal Revenue, State Information Technology Agency (SITA), among others, were arrested by the combined effort of the Police Scorpion Detectives and State Government Tasks Force led by the Senior Special Assistance to the Governor on Special Duties and Strategy, Dr Doyin Adebowale.

He said the suspects were picked from various ministries and departments of Ondo State Government for issuing fake income tax clearance, drivers’ license certificate, and issuance of fake road worthiness certificate to innocent members of the public.

The police spokesman explained that investigation conducted by the police revealed that one of the suspects specialises in forging the exact signature of the Chairman of Board of Internal Revenue and issuance of fake documents to defraud unsuspecting innocent people of the state.

According to the Police image make, another of the suspects was also discovered not to be a genuine staff of Board of Internal Revenue, but was fraudulently recruited and it was later discovered that the other suspects use his bank account to lodge in huge sums of money they allegedly defrauded from their victims in the state.

“This success recorded in this case was made possible because of collaborative efforts of the police and the state government and I can assure you that the suspects would soon be charged to court.

“We are using this medium to warn those who are in the habit of defrauding innocent people, to desist from such  act or be ready to face the full weight of the law”, he stated.

Speaking to journalists on behalf of Ondo State Government, Dr Adebowale said the fraud was detected through intelligence sharing between the state government task force in conjunction with the Police Scorpion Special Squad and one of the victims was learnt to have worked for 22 years in one particular office and have been involved in a similar crime for which she was investigated.

Adebowale said that the same person was understood to have returned to that same office after she had in time past arrested, investigated and released, adding that she must be using some connections to cover up her alleged criminality just as he said the state government is running a transparent government devoid of any sharp practices.

He warned those in civil service who are bent on defrauding the state government to have a rethink because they will not succeed in their criminal quest to reap where they did not sow just as he commended the police for assisting in arrest of the suspects.

One of the suspects who identified herself as Mrs  Abiodun Oluwatoyin who spoke to The Hope denied any involvement in the fraud saying she issued a tax income clearance she collected from Board of Internal Revenue and that she could not identify which certificate or receipt that is fake.

Other suspects arrested for armed robbery cases, the PPRO said were nabbed in various locations in the state for allegedly hijacking trailer carrying petroleum and robbing the driver of money and other valuables

He told reporters that after the suspected robbers had dispossessed their victims of their money, they normally take them to a nearby bush and tied them to a tree in the bush before nemesis caught up with them.

Also paraded was a middle aged man who dressed like a mad man to allegedly extort innocent people at Benin garage along Owo Road and money in various denominations were recovered from his bag.

He said from police investigation, the suspect, whose name he gave us as Olajide Adeseoye, from all indications the suspect is just pretending with his appearance, adding that the policemen are still counting the money.