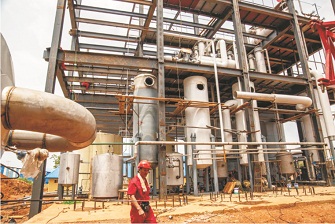 By Maria Famakinwa
|
The five companies springing up at the Ore industrial park in Ondo state will employ not less than 21,500 people.

The Ore industrial hub has already employed over 1500 people of the State.

The forum was on assessment tour to Ondo Linyi industrial hub which houses textile mill, paper mill, agro-chemical company, MDF, Cassava to ethanol plant among others.

Ajipe explained that the industrial hub came into being due to the signing of agreement between the state government and Liyin, a city in China last year to explore the areas where they can be of benefits to each other.

“This industrial hub has already employed over 1500 citizens of the State and when it is fully completed, it state will employ 20,000 direct and indirect labour which will comprise  indigenes of the state.

“Not only this, the state government has already signed MoU with automobile company and in three months time, the state will be assembling vehicles.

Very soon, Africa College of Agricultural Vocational and Technology Studies (ACABAT) will also kick off where people will be trained on how to handle the machines we are using.

We are going to be buying cassava from farmers and be processing it into ethanol which is good for preservative, starch and others. We want to revolutionalise cassava in order to provide jobs for the jobless in the State.”

Wife of the Governor, Arabinrin Betty Anyanwu-Akeredolu said the state is an industrial hub for all kinds of businesses where people within and outside the State can come and transact businesses.

“There is no gain saying, Mr Governor is really working as you can see things for yourself. Majority of people working here are youths from the state and this is another way to enjoy dividend of democracy.

“The beauty of doing business in Ondo state is that most of the raw materials needed are available within the state which makes it much easier. It is a commendable initiative that will help to create jobs for the citizens, invite foreigners to patronize the state and improve the economy of the state.”

On the reason for the assessment tour, Mrs Akeredolu said that she came with other FOWOSO members to see things for themselves that the present administration in the state is working.

“I came here so that my FOWOSO women who are my foot soldiers can see things for themselves and go into the town to spread the good news that Aketi is working, Aketi is a man of integrity whose name can be used to get money in a bank.”

The Special Adviser to the State Governor on Women Affairs, Mrs Titi Adeyemi thanked the Governor for keying into projects that will improve the lives of the citizens and urged the people of the state to seize the rare opportunity to better their lives.