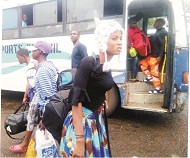 One hundred and eighty athletes will be representing the state in the annual sports fiesta, which comprises 67 male and 41 female athletes.

The 22 sporting events the state will compete for include; Football, Handball, Badminton, Squash, Lawn Tennis, Table Tennis and many others .

Fabuluje said the state contingent after the screening were battle ready for the competition saying all the athletes and their officials are on ground to show the class they are made of.

He added “that the screening for us, in Ondo state will just be to fulfill all the righteousness, because the state had already screened the would be representatives of the state.

He enjoined the people back home to pray for the contingent and be expecting a good outing from the state’s representatives.

The maiden edition of the National Youth Games was held in Abuja in 2013 while the last three editions were held in Ilorin, the Kwara state capital.