60-yr-old, five others in court over child theft 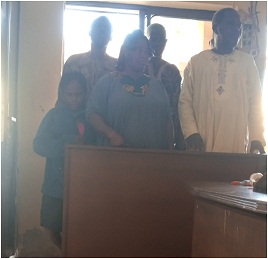 Six persons have been arraigned before an Akure Chief Magistrates’ Court sitting at Oke-Eda for stealing a five-month-old baby.
The defendants include: Gbadegesin Adeleke, Adesanya Sade, Rafiu Sade, Kolawole Kayode, Jimoh Muritala, and Afolabi Simon.
The defendants were arraigned by the men of Ondo State Security Network codenamed Operation Amotekun on two count-charges of child stealing, attempt to deprive Bassey Blessing of her personal liberty.
According to the charges read in court, the suspects were alleged to have on July 25, 2022, at Ore, within the jurisdiction of the Honourable Court, did conspire together to commit a felony to wit child-stealing and thereby committed an offence contrary to and punishable under section 516 of Criminal Code Law, Cap. 37, Vol. 1, Laws of Ondo State of Nigeria, 2006.
The State prosecutor, Olusegun Akeredolu told the court that the defendants conspired together to steal a baby and the offence contravened and punishable under Sections 516, 371(1) and 249(D) of the Criminal Code, Cap 34, Volume II, Laws of Osun State of Nigeria, 2002.
The defendants pleaded not guilty to the charge.
Akeredolu prayed the court for an adjournment to enable him prepare for his trial.
The defendants’ counsel, O.O Familusi urged the court to grant his clients bail in most liberal term.
He promised the court that his clients would not jump bail, adding that they would provide credible surety who would stand for them.
Magistrate Tope Aladejana after listening to the arguments from prosecutor and defence counsel admitted the defendants to bail in the sum of N200,000 each with one surety in like sum.
He added that the surety must provide tax clearance for the current year and live in court jurisdiction, adding that the passport photographs of the sureties and the defendant must be taken.
He adjourned the case till September 1, 2022 for hearing