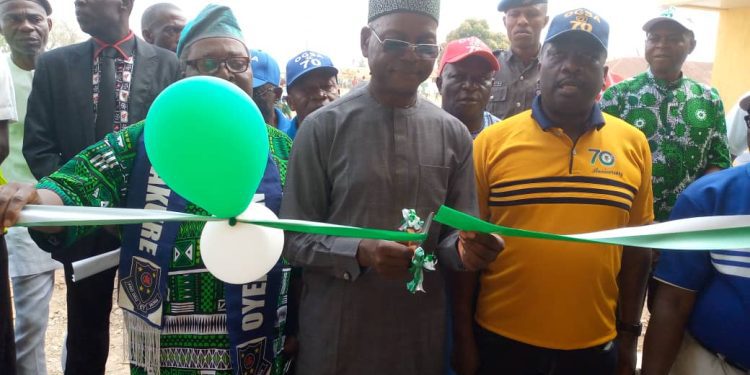 As part of events to commemorate the 70th anniversary of Oyemekun Grammar School, the Ondo State commissioner for Education, Science and Technology, Pastor Femi Agagu on Wednesday commissioned sets of newly built administrative block, class rooms and guest house within the school premises.

The projects built by various sets of the Oyemekun Alumni association was said to be a part of the association’s contribution to the advancement of education in the State and their own way of giving back to their alma mater.

In his address, Agagu lauded members of the alumni for their initiative noting that Oyemekun at 70 is something worth celebrating considering the school’s various groundbreaking achievements both in the past and in recent time.

“70 years in the life of any individual is worth celebrating but in the case of Oyemekun Grammar School, it is not just ordinary 70 years but one filled with fulfilment and landmark achievements.

“The fact remains that the present situation in Nigeria has gone beyond what the government alone can handle and that is why the contributions of OGSA Alumni in giving the school a face lift is highly commendable.

“I want to as well congratulate the principal of the school, Mr Ogunleye Okeowo. I personally do not influence the posting of principals except for some five schools which I believe are flagship in the state of which Oyemekun is one of them, so I am involved in posting of principals here and I can say that I have no regrets posting Mr Okeowo.”

Earlier in his remarks, the national president of the alumni association, Dr Niyi Ijogun noted that the association is driven by the zeal to give back to its alma mater.

Ijogun said “provision of quality education is not only the duty of the government but for all and sundry, hence the decision of members of alumni to put up these structures for benefit of the students.”

Recounting the various achievements of the school in recent times, the school principal appreciated governor Akeredolu for his education friendly policies noting that the school would not have recorded such ground breaking achievements without the support of the state government.

“I thank the Lord for making me witness this celebration and that it came to being during my time as the principal of this citadel of learning, I also want to specially thank the governor of Ondo state and members of the alumni association.

“The great fit been achieved in Oyemekun would not have been possible without the support of the state government under the Arakunrin Oluwarotimi Akeredolu administration.

“In July 2022, one of our students, Chukwu Ebenezer who represented the whole of Nigeria in Turkey came first and became the pride of Nigeria.

“Also, our students came first out of 29 states present at the National Military quiz and debates competition held in Ibadan, August 2022 and I was recognized as the best principal in the whole of Nigeria.

“All these achievements would not have been possible without the support of the Ondo State governor. The prompt payment of salaries and several education friendly policies of government through the ministry of Education is laudable and highly appreciative.”

Delivering the anniversary lecture with the theme ‘REBUILDING THE BROKEN WALLS OF EDUCATION: THE ROLE OF THE ALUMNI ASSOCIATION’ the guest lecturer, Prof Folorunso Adigun Fagbohun, a Professor of Law and former Vice Chancellor of Lagos State University noted that Oyemekun is in competition with its contemporaries.

He charged the alumni association to continually build on the laudable education legacies already laid so as to remain relevant among its equals.

The don noted the roles of the alumni to their Alma mater as institutional ambassadors, students’ guardian, school’s advisors amongst others.

He lamented that records have shown that Nigeria is always at the forefront when it comes to negativity and backward especially in education attributing the cause of this to poor education financing.

“Why is it that Nigeria is unable to make a difference in education, this is because less attention is given to the education sector. During the era of Awolowo, 41% of the national budget is often allocated to education but now, it is below 7%.”

Professor Adigun charged members of the alumni to continually give their best towards the advancement of their Alma mater stressing that it is the only way to contribute their quota to education.