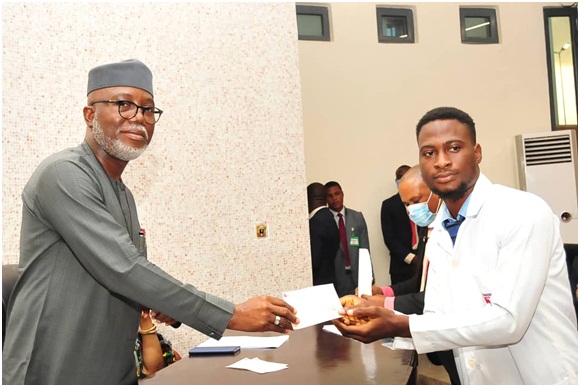 Ondo State Deputy Governor, Lucky Aiyedatiwa on behalf of Ondo State Governor, Arakunrin Oluwarotimi Akeredolu, presenting a cheque to one of the beneficiaries and a student of the University of Medical Sciences UNIMED, Ondo City, Mr. Mustapha Ahmed Olawale, during the flag-off of the disbursement of Bursary / Scholarship to students of the state origin in all public tertiary institutions, held at the Cocoa Conference Hall of the Governors office in Akure

Ondo State Governor, Arakunrin Oluwarotimi Akeredolu on Tuesday began disbursing N97 million as bursary to 7,449 students of the state origin in the country’s tertiary institutions for 2021.
Akeredolu stressed the importance of education and human capital development to achieving the socio-economic goals of his administration.
Represented by his Deputy, Mr Lucky Aiyedatiwa, the governor listed four categories of the students that would benefit from the scheme.
According to him, the beneficiaries are general bursary award to Ondo state students in public tertiary institutions and scholarships to students in the Nigerian Law Schools.
He said that the others are scholarships to Ondo State students at clinical stages in their medical studies and scholarship to all Ondo State physically challenged students in public tertiary institutions.
The governor said that scholarship award to the state’s students with disabilities was automatic.
“Apart from this scholarship programmes, we have intervened massively in infrastructural development at all levels from primary to tertiary institutions throughout the state.
“The infrastructural development already achieved in public primary schools in the state is unprecedented and has been recognised and applauded by different stakeholders from within and outside the state,” he said.
He advised the beneficiaries to shun vices and be good ambassadors of the state at all times.
The Permanent Secretary, Ondo State Scholarship Board, Mr Joshua Folayemi charged the beneficiaries to see the gesture as a clarion call to strive at achieving excellence in their studies.
Folayemi also advised them to be good ambassadors of the state.