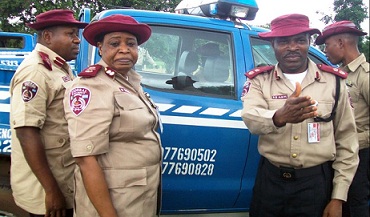 According to her, “Human factors include speeding, traffic violation, drunk driving, overloading, use of phones on the wheel, impatience of drivers.

“Wrongful overtaking and use of expired tyres among others contribute to over 75 percent of road accidents,” she said.

Ojo-Gbenga gave the assertion during the inauguration of the public sensitization campaign on ember months, held at New Garage.

She added that environmental and technical factors also contribute to road accidents in the country.

The unit commander said that September to December is usually associated with high vehicular movements resulting in increase in road crashes.

She appealed to motorists and motorcyclists to abide by traffic rules and regulations and endeavor to avoid the human factors that may lead to road crashes.

The commander said the FRSC was committed to intensifying sensitization and enlightenment campaigns to reduce road mishaps.

She therefore, solicited the support of stakeholders, including the road transport unions to instill safe driving culture on road users.