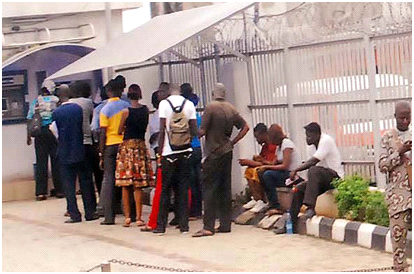 Customers of commercial banks in Ondo State have been subjected to many hours of queuing under the sun as most Automated Teller Machines (ATMs) failed to dispense cash.
The Hope went round major cities in Ondo state and discovered that over 70% of the available ATM machines were not dispensing cash and the few remaining witnessed huge crowd.

Our observations also revealed that Nigerians are now at the mercy of Point of Sale (POS) operators with exorbitant charges
In the banking area at Alagbaka, Akure the state capital, majority of the ATMs were empty as only very few machines dispensed cash to teeming customers.
Similar reports were brought from other areas in Akure, Ondo, Ikare, Owo and Akoko.
Some of the frustrated customers who spoke with The Hope, accused the banks of deliberating sabotaging the ATMs to make POS business thrive.

A business woman, Mrs Jumoke Andrews was full of rage lamenting that she had been under the sun for two hours,
According to her, she needed some cash to pay a supplier so she could get goods to sell for the Christmas but there was no money in the ATM machines around.
“It seems the banks and the POS owners are working in cohort. I need just N30,000. The banks do not allow us to withdraw in the banking hall but PoS operators want to collect N400.

“I have walked round banks in this Alagbaka and this is the only one with reasonable crowd”, a civil servant, Mr Bode told The Hope.
In Ondo town, Mr. Osewa Vincent said “I have actually noticed that most of the ATMs are not as efficient as when they were first introduced and have always wondered about what could have been the major reasons for such malfunctions.
“It is bad and should be looked into by appropriate authorities. Our ATMs should not be seen as mere infrastructures. They have the capacity to dispense cash but one will notice that in a place with five ATM machines, it could be only one that will be working most times.

“I would not be too certain that there is a connivance but there could be a pact between the operators of our ATMs and POS vendors. If all ATMs are working fine, no one will patronise the PoS stand”, he alleged.
A businessman, Mr. Romanus Odugwu noted that the machine could not dispense cash because the banks did not make enough money from the machines.
He added that “So, they increase their income when we withdraw money from POS operators. May be that is why they do not load their ATM with enough money like before.”
A civil servant, Mr. Busayo Falekulo said the banks might intentionally sabotage the efficiency of their ATMs for the POS handlers to make more profit.

“This seems to be the real reason behind cash scarcity at the ATM. Although we have experienced difficulties in withdrawing money from bank ATM in the past, the issue has gotten worse since the introduction of the PoS”, he told The Hope.
A trader, Mrs. Oni Mercy said “POS operators are having so many customers now because many of the ATMs in our banks are not dispensing money.
“Sometimes, the whole ATM in some banks will not dispense cash at all and people who need money urgently rush down to POS operators to get it. It is normal now to get to the bank ATM and find that they are out of cash.

“At times, you don’t even need to get to the ATM before the security officers tell you that none of the machine is dispensing cash. We can only wonder where the POS operators are getting the money they give to customers from.”
Speaking on the condition of anonymity a bank manager told The Hope that the CBN fails to release enough cash to the banks, noting it might be a way to enforce cashless policy.
She noted that banks had to rationalise the little cash at their disposal.