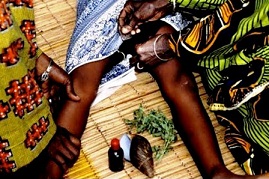 An expert Mr Seidu Kayode has revealed that no fewer than 80 percent  of Nigerian girls and women were victims of Female Genital Mutilation (FGM) in the country.

The  health educator at the Ekiti Southwest Local Government Area of Ekiti State, gave the revelation in Ilawe-Ekiti ,  during a Stop Cut Project and community sensitisation workshop to end FGM in the council area.

The workshop  organised  by HACEY Health Initiative, was  funded by the United Nations Trust Fund and Spotlight Initiative for women and girl child in the area.

Seidu who lamented  that the development,  had caused permanent and temporary harms  to female folk, urged residents of the area to join forces with the government  to end the menace.

He disclosed  that a  national survey carried out in 2018 in 20 states of the Federation, revealed that  “about 80 percent   of Nigerian women  and girl child have been victims of  genital cut.

Describing the number as very alarming, the expert, stressed “the need for the people to join hands with the government in sensitising and educating the people on the need to  end the harmful and life-threatening practice”.

She added that  the organisation had embarked on advocacy visit to some traditional rulers in different communities within the state on the need to sensitise their subjects on the harmful effects of FGM.

The Executive Director, said other advocacy efforts made by his organization were sensitisation of couples during marriages, market women and other women-led organisations.

She aexplained that scientific survey had shown that victims of FGM are those within the age range of 15 and 49 years,with many suffering  psychological, emotional , sexual and psycho Traumatic Stress Disorders.

In their separate remarks, the Iyaloja of Ilawe and Igbara-Odo Ekiti, Chiefs Yemisi Eleyinafe and Chief Ajoke Hasstrup, said stakeholders in the communities will continue to intensity  efforts  to end the menace of FGM  to safeguard the lives of children and women in the communities.

They equally promised that they will begin the  process of passing of information to the populace on the legal implications of FGM and  punishment  awaiting  offenders, to dissuade them from embarking on such harmful and prohibited practice.