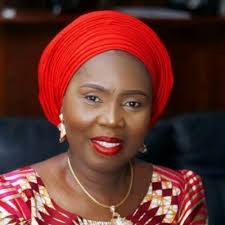 By Mary Agidi
|
The wife of the Ondo State governor, Mrs. Betty Anyanwu-Akeredolu has challenged Nigerian women to strategise and come up with a plan to achieve gender parity in governance.

Mrs. Akeredolu who expressed dissatisfaction that only one female was elected into the State ninth Assembly, noted that the failure of Nigerian women to make plans and expose young women into political fora right from the secondary school contributes to the decline of female in politics and governance.

She stated this during an interactive session with the members of the Association of Online Media Practitioners, Ondo State chapter during their courtesy visit to  her.

According to her, the BEMORE girls initiative is a strategy to ignite leadership interest in the mind of secondary school girls and prepare them for greater responsibility ahead.

“The problem we have is that we don’t have strategy. For you to achieve gender parity, we must have a plan which we don’t have in Nigeria.

“For me, it is by exposing these young ones to political forum and things that will elicit their interest and that have to do with politics.

“For us to meet this parity, we must begin to lay foundation with the young ones so that they know that politics is meant for both men and women and it is not a dirty game and not for ASAWO (prostitutes) people.

“In an Assembly where you have a woman out of the 26 seats, what much can she do? But we are urging her to start forming alliance with her colleagues because a lot of bills will be coming through her and she needs people’s support.

“But I’m happy that quite a number of Nigerian men are beginning to see themselves as He4She, so she might likely see such in the Assembly”, she said.

She urged young women who are interested in politics to start forming alliance and engage women with programmes that will benefit them, so that they can have the full support of female voters, noting that women comprises 50% of Nigerian voters.