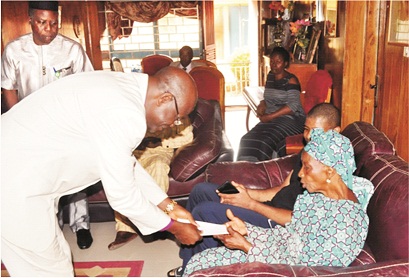 The impactful and positive contributions of the late diplomat, Amb. Oladele Akadiri, to the growth and development of Adekunle Ajasin University, Akungba Akoko (AAUA), will forever speak loud and be reference points for a long time to come.

This was the submission of the Vice Chancellor of the institution, Prof. Igbekele Ajibefun, while speaking during a condolence visit by members of the University Management to the family of the late Akadiri who was Pro-Chancellor and Chairman of the Governing Council of AAUA from October 2014 – January 2016.

Prof. Ajibefun noted that the late Akadiri brought his wealth of experience as an administrator, educationist, and diplomat to bear on the running of the Institution during his short but eventful tenure.

He observed that though it is always painful to lose a loved one, the family should take solace in the impactful and fulfilled life and times of the departed.

In her response, the widow of the late Pro-Chancellor, Mrs. Omolara Akadiri, thanked members of the University’s Management for identifying with them in their hour of need, and for taking time out of their tight schedules to visit and condole with them.

The late Akadiri passed away peacefully on September 2, at the age of 89. He was appointed Pro-Chancellor and Chairman of Council of AAUA on October 29, 2014 and served till January 12, 2016 when he voluntarily resigned the position.

He successfully midwifed the appointment of a new Vice Chancellor and University Librarian, as well as brought on board a new set of external auditors for the University.

His tenure also cemented the existing peace and tranquility on campus, evolved major policies, instituted staff housing and insurance schemes, and a new approach to calculating academic publications among the teaching staff.

Akadiri instituted a novel anti-corruption essay competition in the University as his token towards eradication of corruption in the education sector and the nation. He also instituted and promoted moral excellence among the youth, especially students.