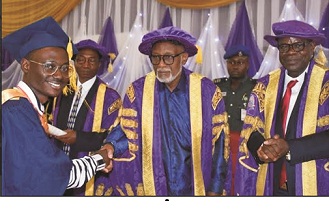 The governor revealed that it was on record that products of the university have consistently performed admirably well in national and international examinations, just as staff members have won laurels in research and knowledge impartation.

Akeredolu who disclosed this at the 9th Convocation ceremony of AAUA which also coincided with the 20th year of the existence of the institution, said government was proud that the citadel of learning was doing exceptionally well nationally and globally despite its young age.

According to the governor, within such a relatively young age, the University has consistently emerged as the Best State University in Nigeria, and it is currently ranked the ninth best out of the about 160 Universities in the country.

At the 9th convocation ceremony, Akeredolu offered the overall best graduating student of the University, Ajakaiye Oluwatobi, an automatic  employment, saying that the student deserves to work in the institution to enable him contribute his knowledge to the growth of the school.

Oluwatobi graduated with a CGPA of 4.76 from the Accounting Department, Faculty of Social and Management Sciences of the institution.

A total of 3, 804 students graduated from the various Faculties and Departments of the institution with 20 of the graduands having First Class, 933 earning Second Class (Upper Division), 2, 007 Second Class (Lower Division),  while 623 and 28 are in Third Class and Pass categories respectively.

Also,  Akeredolu named the Senate Building of Adekunle Ajasin University after the immediate past governor of the state, Dr Olusegun Mimiko, noting that the  immense contributions of the former governor to the development of the University has projected it to the outside world.

Akeredolu while delivering his convocation address reiterated his administration’s readiness to the funding of all the higher institutions in the state so that they could measure up to their peers across the globe,  just as he called on well meaning individuals to support the funding of university education in the country.

He equally advocated for self sustainability as a  way to effectively run the University system in the country, just as he congratulated the management of the citadel of learning, parents, guardians and the Akungba people for seeing the graduands through the rough journey to success.

Earlier, the pro-Chancellor and Chairman, Governing Council of the University, Dr Tunji Abayomi and the Vice Chancellor of the institution,  Professor Igbekele Ajibefun lauded the state government’s commitment to the funding of the school which is adjudged the best state owned University in Nigeria.