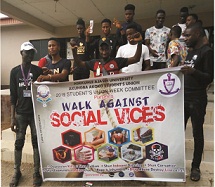 The rally which was titled ‘Walk Against Social Vices’ was primarily aimed at curbing social vices such as indecent dressing, thuggery, cultism, internet fraud, bribery, examination malpractices, among others.

Meanwhile, Security officials of the institution have been declining entrance into the school students who wore  what the school management termed `indecent dressing and disheveled appearances’.

Students who wore clothes that revealed  their cleavages (for ladies), any form of short dress, crazy jeans and many other dresses were chased back to their hostels to wear more befitting dresses.

The alarming rate of the vices geared the students’ union body of the institution to embark on the rally. The movement is part of the activities planned for 2018/2019 students’ union week

In his reaction, Chairman Planning Committee of the Students’ Union Week, Comrade Oyedokun Ayodele said the move was  to correct the abnormalities that had eaten deep into the fabrics of the students.

“The students’ union is playing a vital role, it has given its support to the security unit to fight any form of social vices. As a good student, you must dress well, you must say no to drugs, raping and any other forms of social vices,” he said.

Ayodele who is also the Director of Campus Affairs, National Association of Nigerian Students (NANS), added that students must shun social vices both within and outside the campus.

“We are trying to tell the whole world that we are saying no to indecent dressings, both within and outside the campus. We believe some people have been convinced enough that they should say no to social vices”

The students’ union president of the institution, Comrade Samuel Adesomoju (Sampraise) expressed his displeasure over  the indecent dressing which now rampant among students. He also lamented that the union has not been able to hold such event for the past four years.

“I feel sad when I see some students dress in clothes showing half of their nakedness, and trousers that is half torn. But I think this rally would be of good impact on them.

The past administration has not been able to organise this kind of event for the past four years but we are starting it gradually and bringing it on board again. We sì much believe in our capacity and our ability, and we believe that we are going higher,” he said.

Omotola Oseni, a 300 level student of the department of Animal and Environmental Biology, praised the students Union for coming up with such idea that will curb social vices.

He said, “the harassment by the security on campus on the students as regards indecent dressing is appalling and I must sincerely commend the union leaders for coming up with such a brilliant idea.”

Among the social vices, is cultism which has done serious harm to students. Students residing in streets like; adefarati, medoline, Cele often experience cult clash, which has made them not to sleep with their two eyes closed.

In an interaction with Adedamola Adeusi, a 300-level student of the Faculty of Law, regarded cultism as a vice that has to be curbed. He said people join cultism to trend on campus and some are influenced by peer groups.

“cultism is one of the social vices that many people has find pleasure in. People join it to trend on campus, while some are influenced by the set of people they walk with, and it diminish and annihilates one’s reputation,” he explained.

Feranmi Okuku, a final year student of the department of Mass Communication, said social vices like indecent dressing and examination malpractice has increased.

She however applauded the school management for taking the step to curb the vices.

“Indecent dressing, rape, examination malpractices and the likes are mostly caused by wrong exposure and peer group influence. The management has, however, done a good work in curbing them. Though, there would be those that would still prove adamant to the management’s instructions,” she added.