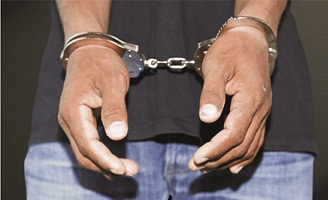 By Sunmola Olowookere
|
A n  Akure High Court has sentenced one Ekpemu John to a life imprisonment after he was found guilty of kidnapping the spouse of the Abodi of Ikoya,  a town in Ondo State.

According to  the   prosecution, the  convict was arraigned before the court on a two count charge of conspiracy and kidnapping and he entered a “not guilty” against the charges preferred against him when it was read to his hearing.

During the trial, the prosecution led by one Wale Bamisile Esq of the Department of Public Prosecutions called four witnesses .

The first witness, Olori Grace Faduyile while testifying before the court narrated how she was kidnapped at gun point at  the palace along with her companion, one Mrs Bamitale Adetuwo by armed bandits and whisked away in her car to Okitipupa.

She explained that they pushed her car to start as it was malfunctioning and took them away in the car while onlookers stood by helplessly because the kidnappers shot bunets  into the air.

She stated further that when they got to Ikoya  bridge, they  forced them into a boat while another boat containng four men that were armed followed  them.

During the journey, she said that the kidnappers who were speaking Arogbo dialect blindfolded them and hit them at intervals .

She explained further that they later heard gunshots  as policemen engaged the kidnappers in a gun duel and added  that they were afraid until she heard the DPO’s voice saying “It is over now, Olori “

She also testified that the kidnappers were worst hit as most of them died while others who were wounded escaped.

She said that the police took her and her companion to the hospital for check up before they were taken home.

Her companion, Mrs Adetuwo Bamitale said that she could recognize the defendant among the kidnappers that abducted them as she saw his face while they dragged them on the floor to the boat.

Another witness, one Segun Elkannah testified that he was the vigilante who arrested the defendant because he felt suspicious of his gunshot wounds.

In his defense, the defendant led by his defense counsel, Oju Kekemeke claimed that he was not part of the gang that kidnapped the monarch’s wife although he heard of the incident when it happened.

Under cross-examination, he however admitted that he was the only Ijaw indigene that was arrested although his landlord who was there when he was arrested along with one other person were all of Ijaw descent and they were not arrested.

While delivering his judgement, Justice Ademola Adegoroye the trial judge observed that all the testimonies of the prosecution witnesses and his statement to the police indicts the defendant.

He therefore held that the prosecution had proved the case of kidnapping against the defendant beyond reasonable doubt.

Thereafter, he  sentenced the defendant to life imprisonment. He however said that he might be given a state pardon if he was found to be of exemplary behaviour while serving his sentence.