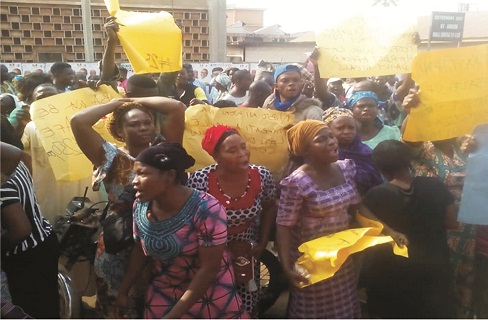 By Jubril Bada
|
Landlords in Abusoro, Olufoam Community, in Akure South Local Government Area of Ondo state, have appealed to the state government and concerned authorities to come to their aids over the threat by the legal owners of their landed property, to resell to them at exhorbitant fees.

The landlords, under the aegis of Landlord Association, Abusoro, made the appeal during a peaceful protest to the palace of the Deji of Akure, on Tuesday, where they expressed their grievances over plans by the legal owners of the land, the Olu Afe family,  to charge additional N250,000 for each parcel of land, they had bought over 20years ago failure of which the family threatened to demolish their houses and property.

The protesters, carried placards with various inscriptions like, ” No payment of N250,000 for re-sale of land at Abusoro, ‘No sealing of our houses at Abusoro’ and ‘Eba Wa Be Ebi Oni Afe. “

Saka, however, alleged that members of the Familoyo’s family sold plots of land to landlords in the community about eight to twenty years ago.

According to him, the family which  court judgement favoured had requested each landlord to now pay N250,000 for the resale of each parcel of land, which he described as hardship forced on landlords.

His words,” The Olu Afe’s family had come with a court order to seal our buildings.

“Some landlords of 20 years old, bought their land at the rate of N6O,000. Even  some landlords who had just one bedroom erected are among those asked to pay this huge amount of money.

“This had prompted us, the landlords, to approach the Deji of Akure to help appeal to the Olu Afe’s family on the issue,”he explained.

Reacting to the issue, two members of the  Familoyo’s family, who  sold land to landlords in the community, Mr. Adedayo Ige and Mrs. Omowumi Babatope, said the plots of land have been in existence for the past 300years.

They told our correspondent that the landlords are in the palace to seek  the intervention of the monarch for peace to reign.

After much clamour, the Deji of Akure, Oba Aladetoyinbo Aladelusi, appealed to the Olu Afe’s family to reduce the amount they  billed each property owner in the community.