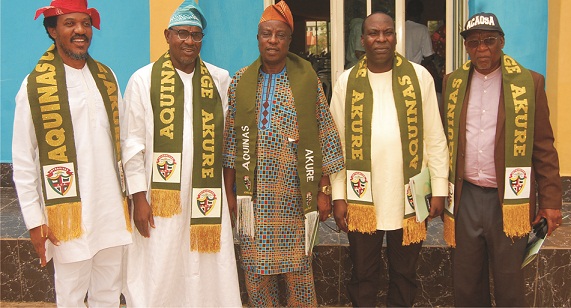 On behalf of the National Executive Committee and members of Aquinas College, Akure Old Students’ Association (ACAOSA) both in Nigeria and in the diasporas, I wish to heartily welcome his Excellency, the Executive Governor of Ondo State, Arakunrin Oluwarotimi Akeredotu, SAN to this auspicious occasion of the commissioning of ACAOSA projects in our great ALMA MATER. It is also my privilege to welcome all our distinguished invited guests as well as Aquinarians who have travelled far and wide to be a part of this celebration.

Most significantly, his Excellency is an Aquinarian and so it gives us so much joy and pride that one of us, is indeed by the grace of God, in such an exalted position and so eminently qualified to perform the commissioning of ACAOSA projects in the school.

Aquinas College, Akure was founded in 1951 in the then forest, appropriately named Igbo-Oliki, and present in our midst today are some of the pioneer students – the Trailblazer§.

The school started as a Catholic Missionary school, but the Federal Government takeover of schools in 1976 with the profound reality of that action is what we have and also witness today.

Your Excellency Sir, please allow me to briefly go down memory lane and acquaint you with some salient points about our Alma Mater ACA, which will clearly illustrate her rich history and the results of the essence of sound education in a conducive atmosphere to build the mind, body and soul. Aquinas College, Akure has always excelled in Academics, Sports and Discipline.

In Academics, ACA is primus interpares in Akure, Ondo State, South West and the Nigerian Federation then and we believe so even now. We have the singular honour of being the only secondary school in Nigeria to have produced so far three (3) National Merit Award winners. They are Professor Oluwafeyisola Sylvester Adegoke, a world renowned Geologist, Professor Francis Abiodun Oluwole, a world acclaimed Nuclear Physicist and Professor Oyewusi Gureje an eminent authority and a distinguished Psychiatrist in UCH, Ibadan.

The above are in addition to so many others like Prince Julius Adelusi-Adeluyi, HRH Luyi Rotimi the Olujigba of Ijigba, Akure, the Anglican Archbishop of Enugu, His Grace Emmanuel Chukwuma and so many highly successful, renowned and distinguished old students in various and often diverse fields, be it in Government Services, Business circle, Military and other endeavours of life just too numerous to mention at this juncture. We have in equal measure, produced so many Rev. Fathers and other members of the Clergy. In short, ACA has trained us ALL to be the best in our individual calling.

In Sports, ACA was the only secondary school in Nigeria to send an athlete to the Mexico City Olympics in 1968. Aquinarian Ajayi Akinkuotu represented Nigeria as a member of the 4 by 400 meters relay team at that Olympiad. The school won the National Grier cup in the Athletics

Competition for secondary schpols in the Federation at the 1968 edition hosted by Hussey College, Warri.

In Football, ACA won the THERMOGENE/OMITOLA CUP in the football competition among secondary schools in the then Western Region in 1970 and 1971. Many of our students played football for the Nigerian National Team as well as for prominent football clubs like Water Corporation, Ibadan. Our current students are still winning Laurels for Ondo State.

Discipline and adherence to the principle of INTEGRITAS provides us with the moral compass to Excellence in all we do. The neatness and the orderliness of our performances made ACA win “March Past” for over a decade.

3.0.         WE HAVE OBSERVED THE DECAYING INFRASTRUCTURE IN THE SCHOOL COUPLED WITH THE STUDENT POPULATION EXPLOSION.

Over the years, the school population has exponentially exploded without a commensurate attention to improve/upgrade the infrastructure. It is in the light of the above that the Old Students’ Association decided on a gradual intervention to revive the old glory of the school by providing the necessary tools and enabling environment for these children to attain their potential in whatsoever field of endeavour they so choose. This institution is endowed with so much raw talents crying for the opportunity to bloom and blossom.

While ACAOSA as a body, individual sets and other Aquinarians have had several interventions in the school in the past with the provision of computers, Table Tennis Boards, Health Facilities, Classroom Renovation, Water Borehole with Generators, Scholarship Schemes, White Marker Boards etc, we deem it appropriate to call the attention of his Excellency to the following major achievements.

This Hall was conceptualized in 1996 and the foundation was laid in 1997 by a few concerned members of ACAOSA led by late Chief HENRY OGIRRI and Architect Dele Olowoyo who was at a time the Lagos State Chairman of ACAOSA.

It was designed to provide adequate facility for ideas to germinate and also enrich the social life of the students and neighbours in the finest tradition of Town and Gown interaction. The Building Committee was initially headed by Late (Engr.) James. Olusoga (the Olisa of Akure) who contributed so much of his resources both financially and otherwise to the progress of the project. Later on, the Building Committee was reconstituted with late Colonel M.V.K. Kikiowo as the Chairman which operated on a Direct Labour System. Serious work on the project actually commenced in 2001.

May the souls of Engr. Chief James Olusoga and Colonel M.V.K Kikiowo rest in peace (Amen).

Contributors to this project have been wide and varied over the past two decades as can be imagined. This involved all the branches of the Association and its members and I cannot recall all of them at this time butsufficeto list the following:

At this juncture, I will like to pay a special tribute to Engineer Akin Odumakinde who has all this while contributed heavily but anonymously to the project. It is my pleasure now to unveil him for a round of applause.

It is also appropriate at this juncture to mention a few things about the man, Late Aquinarian (Chief) Henry Ogirri of the 1956/60 set after whom this Hall is named in celebration and remembrance of his dedication to the cause. He was a brilliant student and an ace footballer during his student days. Chief Henry Ogirri was very passionate about all matters ACA as he helped conceptualize and midwife the foundation of this befitting multi-purpose School Hall. He spared no effort in resources and connections to bring the dream to fruition. Unfortunately he died suddenly and prematurely in an automobile accident in Lagos while he was Deputy Director General at the Nigerian Stock Exchange. He was also at a time the Chairman of ACAOSA Lagos branch. We miss him tremendously but consoled by the fact that he has ascended to take a higher responsibility for his Creator. May his soul continue to rest in peace (Amen).

4.2. RENOVATION AND RE-EQUIPPING OF THREE (3) LABORATORIES PHYSICS, CHEMISTRY AND BIOLOGY.

Given the particular emphasis placed by the Catholic Mission then on Science Education early in the development of the school, ACAOSA has not been impressed with the decadent status of these facilities and therefore decided to intervene. These facilities have now been renovated and re­equipped. The Renovation/Re-Equipment of the Physics, Chemistry and Biology laboratories is geared towards providing the necessary tools and environment for the students to attain their potentials.

This project was sponsored by all our branches including the newly established Europe chapter which is about two (2) years old.

Your Excellency, while we are very much aware of the limited resources available to the State and the widening need for intervention in very many areas, we want to seize this opportunity to inform you of our request fortheupliftment of our school for the benefit of the current students.

3.2.         MASSIVE INTERVENTION IN THE SCHOOLS INFRASTRUCTURAL FACILITIES AND HUMAN RESOURCES.

3.3.         CONTROL AND RATIONALIZATION OF THE SCHOOL POPULATION FOR EFFECTIVE TEACHING AND LEARNING.

We want to appeal to you sir, that you look kindly into giving back some schools, ACA INCLUSIVE to willing proprietors. This will help free some needed resources for the government while providing the atmosphere for the religiously affiliated schools and others to allow the private sector unleash their proven potential as demonstrated in the past. Examples of such states like Lagos, Edo, Anambra and others can provide the guiding templates to fine tune and domesticate an Ondo State version. We promise to “Walk the Talk” with you and other stake holders like the “PTA”, Teachers Union etc as you provide the necessary leadership and Roadmap that will be of benefit to our children and children’s children.

We wish to inform your Excellency that ACAOSA has been in dialogue with the Leaders of the Mission Schools and we can report that we are now ready to meet you, Sir, once we get an appointment to discuss further on the Return of School to the Mission.

Your Excellency, once again sir, we thank you for your support and we appreciate the honour of your presence on this epic occasion.

Finally, your Excellency, we welcome you most heartily and invite you to commission our modest contribution to lifting the educational standards particularly at Aquinas College and Ondo State in general.