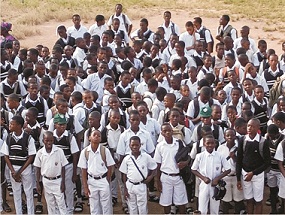 By Bukola Olamona
|
As a way of recognising and celebrating academic excellences, the 1983-89 set of Aquinas College, Akure has offered scholarship to twelve Senior Secondary School    students of the school

The scholarship presentation which was part of activities lined up for the 30th anniversary celebration of  the set, covers their School Certificate and UMTE examinations .

Presenting the scholarship to the beneficiaries at the assembly ground, President of the set, Dr Demola  Akinsorotan charged the beneficiaries to maintain their academic standard warning that any of them who falls below the standard will be shown the way out.

He said a minimum of five distinctions in their core subjects during their promotion examination is expected and enjoined other students to emulate them.

Apart from the scholarship,  Akinsorotan said career mentorship, guardian and counselling will be given to the beneficiaries by the set just as he said next beneficiaries may be selected from the Junior Secondary School.

Akinsorotan who came with some members of the 1989 set said “It’s been 30 years ago that we left the school and we felt we should give back to the school that has given so much to us.

That is  why we decided to mark 30th anniversary with scholarship. Twelve  students benefitted, four in Arts, four in commercial and four in science classes.

We groomed them for over a year before they were exposed to external exams and our terms and conditions were to see the beneficiaries making names especially in UTME. We want to see them coming between first and third and this is our strong desire.

The school principal, Mr Olusola Adeyeye appreciated the old students for their gesture and urged the students to emulate such so that when they pass out, they would  be able to plough back to the school in future.