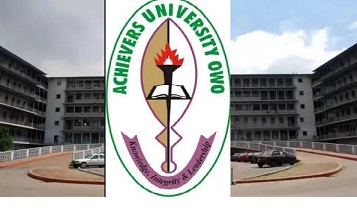 The Vice Chancellor of the school, Prof. Samuel Aje, disclosed this while addressing a press conference to mark the 12th Convocation ceremony and 15th Anniversary of the school.

Aje said the National University Commission, NUC, had given the school the nod to start the programmes and arrangements had been concluded by the school.

According to him, the Aviation School  will have a 1.5 kilometre runway to  the airstrip, which the land has already been acquired in Owo.

He disclosed that no University in the country and West West Africa offer the programme and assured that the institution would make it the best, at least in Africa.

The VC also disclosed that the school would also start programmes in the College of Medicine, Pharmacy and Education.

Speaking on the convocation ceremony, the Vice Chancellor noted  that about 520 would graduate  during the ceremony, with 30 of the students coming out with first-class.

He said all the students enjoyed free tuition in ten  courses which include,  Accounting, Business Administration, Economics Political Science, Sociology, Biochemistry,  International Relations, Plant Science and Geology among others.

Equally, he stated that the school is also giving students in Engineering in seven fields a 50 percent cut in tuition fees.

Meanwhile, the school will award Honorary Degree on some eminent Nigerians among whom are the Olowo of Owo, Oba Ajibade Gbadegeshin Ogunoye III, the former president, Court of Appeal of Nigeria, Honourable Justice Isa Salami, CFR, OFR and the Minister of Communication and Digital Economy, Professor ISA Pantami.