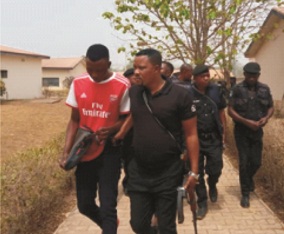 By Bukola Olamona
|
Six students of Achievers University, Owo have been expelled from the school for their involvement in cult  related activities.

The affected students have been handed over to the police for further investigations.

While briefing newsmen, the Vice Chancellor, Prof. Tunji Ibiyemi, said their expulsion from the University was premised on their involvement in cultism after all fair hearing  and due  process  within the law establishing the institution.

He said,” By this  public announcement through the press, these students cease to be students of Achievers University, Owo.

“Anybody (individual or Corporate) dealing  with them as Achievers students does so at his or her own risk.

” The Management of the University has set up a fact-finding Committee to conduct a thorough investigation among the students to identify any other student involved in such illegal organization.

Also speaking, the Chairman Disciplinary Committee in the institution, Prof Joseph Odekunle, said the affected students have passed through fair hearing and also defended themselves.

“They  pleaded guilty, which is why they have been handed over to the police as the university cannot punish them beyond expulsion.