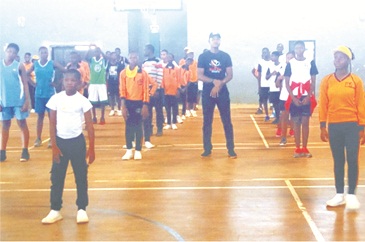 By Femi Atolagbe
|
The indoor hall of the Ondo State Sports complex, Akure  during the week was filled to the brim as students from within and outside the state gathered to participate in the  maiden edition of Blitzik Sports basketball clinic.

The basketball clinic according to the initiator  of the event, Mr Isaac Afolabi, a sports journalist was organized basically to encourage and tutor  students the rudiment of Basketball at the tender age.

“Our NGO is purely based on sports development, also to serve as an  advocate of  better welfare packages for the athletes and to charge the government on the need to invest in other sports in other  not to concentrate on football alone,”he said.

Afolabi, who is the Ondo state Assistant Secretary of the Sports Writers Association of Nigeria, SWAN, admonished athletes that are still active to consider their retirement age by enrolling for any skill or academic that will launch them back to the society after their retirement from active sporting career.

He said some athletes without other skills do  find life so hard after retirement to the extent that they were not able to meet up with their bills.

Earlier, the General Manager of Ondo State Sports Council, Mr Wande Fabuluje while declaring the event open called on all and  sundry in the state with lofty ideas on how to develop basketball and other sports  in the state to take a cue from the initiator of BlitZik sports.

Fabuluje added that there is need to groom  and showcase God’s talent deposited in these  kids for future purposes.

“Who knows, some of these kids  may be the one to replace some of our ageing athletes,” he said.

The Chairman of Ondo state Basketball Association, Mr Francis Gbiri commended the initiator for his zeal and love for sports development.

He charged  the stakeholders in Sports industry, especially basketball coaches and players to emulate the gesture and contribute their quota to the development of the game in the country.

He added further that information is key to sports development and therefore called for synergy between sports men/ women and journalists.

Gbiri appreciated the participating schools management for allowing their students to be part of the  clinic and encouraged  the students to continue playing basketball ,saying it has no negative effect on their education.

He said “it’s a way of shifting attention from football to other sports,  everybody is talking about football, with this we can talk about basketball”

“It’s a lofty idea , I pledged the support of positive FM management to support him humanly and professionally by giving the event adequate publicity”.

The leadership of the Nigeria Union of Journalists, NUJ, Ondo State council, represented by the Secretary, Mr. Leke Adegbite promised the support of the union for Blitzik Sports, while describing Afolabi as a passionate Sport journalist who is determined to achieve greatness in his endeavour.

While speaking ,the proprietor of Ekiti invaders, Mr Oyebo Adebowale, lauded the brain behind the clinic, saying the event afforded the students the opportunity to understand that  they can go to school and still participate in any sports of their choices.

He emphasized that the clinic was well organised because it involves the grassroot which are the secondary schools,  noting that  this is the  best time to catch them young .

He therefore advised parents to allow their wards who are interested in sports to  continue, adding  that they should also  support and encourage  them financially, materially, morally  and physically for them to attain the highest pinnacle of their career.