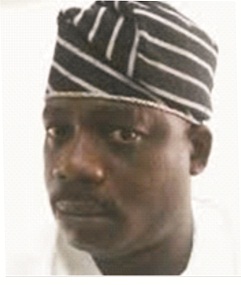 Ipinsagba, a senatorial candidate of the African Democratic Congress, ADC, were kidnapped along with the  State  Chairman of the party, Mr Bisi Ogunyemi around 7pm at Ago Ajayi area, while returning from Ikare -Akoko.

Many politicians have gone into hiding  as  the news of the abduction went into circulation causing  anxiety among politicians.

Police sources described the kidnappers as robbers,  who had robbed two commercial vehicles before abducting  the politicians for ransom.

The Hope Metro  gathered that the robbers abandoned the robbery operation and escaped with the politicians in their own  vehicle.

Already, the  Police spokesman, Mr Femi Joseph said a search  party was being organised to rescue  those abducted.

Joseph revealed that the Area Commander of the jurisdiction has been ordered to fish out the abductors, while the Commissioner of Police has dispatched a unit of Mobile Policemen to aid the search for the abducted politicians.

Similarly, the  anti-kidnapping unit of the State Police has been drafted to the area to ensure the safety and release of those  kidnapped.

He assured that efforts will not stop at that, until the victims are rescued and united with their families.

“We will not only stop at that, but ensure that the perpetrators of this act are brought to justice. The hoodlums usually  take advantage of the terrible state of the road and what they do is to flock  around  where they feel the drivers will slow down.

“As soon as the drivers slow down,  they use the opportunity to rob or kidnap for ransom.

“But this time, we want to say that we have devised another new means of dealing with them. And we will  ensure they are up for a  terrible experience such that it would not repeat it self,” he assured.

Meanwhile, distressed relations of those abducted have gone spiritual to ensure the safety of their loved ones.

When The Hope visited the family house of the kidnapped ADC chairman in Ikare Akoko, the place was besieged by sympathisers as well as other family members. But nobody  was willing to talk to the press.

A senior brother to the ADC chairman who declined being mentioned for security purpose told The Hope Metro that the whereabouts of the chairman and other victims remained unknown as at the time of filing this report.

“We just received a call that they have been kidnapped. But no one has called us to tell us  where they are or demand for any ransom”

He disclosed that they are not leaving any stone unturned to set the kidnap victims free as they are now, looking unto God for their release from  the abductors.

“We are now praying and we are also fasting as we believe only God can save the situation. Our hope remains in God.”