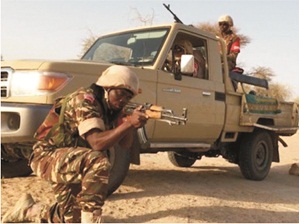 By Maria Famakinwa
|
Kidnapping for ransom has now become money spinning venture across the country. The menance which first started in the South South years ago has now assumed a frightening dimension as many especially youths hide under the guise of unemployment to perpetrate the heinous crime.

Kidnappers taking the advantage of the country’s security lapses kidnapping innocent people in schools, hospitals, offices, markets, motor parks, on the highway and even at home. Victims whose family could pay ransom were released while those unable were killed or maimed. Sadly, there have been reported cases of victims who were killed after collecting ransom from their families. This nefarious act is so serious and pathetic that it has defy every government solution to tackle it.

Travelling by road which is considered to be the cheapest and commonest is no longer without fear as many have been forced to canceled their trips to avoid being kidnapped. Not even the highly placed in the society including their family members are spared as they are the actual target of kidnappers. The lucky ones among them who were released after paying ransoms always have bitters tale to tell.

Though, Nigeria Police Force (NPF) cautions citizens against paying ransom to kidnappers but many seem not to be heeding this warning having lost confidence in security agencies to rescue their relations in captivity. In May this year, a lecturer at Obafemi Awolowo University (OAU), Prof Olayinka Adegbehingbe was kidnapped and released after huge ransom was paid. In July of the same year, Samson Siasia’s mother was kidnapped in her village and was reported to be released in September after #15m ransom was paid.

Early September this year, a lecturer of Ondo State University of Science and Technology, Okitipupa, Mr Gideon Okedayo was kidnapped by gunmen at Akoko junction along Igara -Auchi road but later found dead. The recent one was the kidnapped of a judge of the Court of Appeal, Benin Division, Justice Chioma Nwosu-Iheme after killing her police orderly last month. The judge has since been released, but ransom paid undisclosed. The list is endless has many unreported cases of kidnapping happen on a daily basis.

Reacting to the issue, a retired police officer who gave his name simply as Olawanle blamed increase rate of kidnapping across the country on the harsh economy couple with high rate of unemployment. His words, “The best way to solve the problem of kidnapping in the country is to provide jobs for the jobless and improve the economy. The truth is that Nigerians are hungry and they want to do anything to meet their needs. How do you expect a country to be peaceful when youth who form the larger percentage of the population are jobless? Go to different family, you will find out many graduates unemployed.

“These jobless graduates want to feed, raise their own family and meet other basic needs of life yet, without paid employment; some of them who cannot endure the challenges will surely want to do anything to savage the situation. Majority of the people arrested for one crime or the other are majorly frustrated youth with good university results without jobs. In an attempt to solve their problems, some of them travelled to other countries through illegal routes and never survive it.”

On the way forward, Mr Olawanle stressed the need for Federal Government to make jobs available and improve the economy. “If the economy is improved, graduates who could not get white collar jobs can start something on their own. Besides, improved economy will entice foreigners to the country thereby creating jobs for our teeming unemployed youth. If the economy is improved, the people’s standard of living will also improve and the country will be peaceful.”

Sharing similar sentiment, a political analyst, Mr Anthony Adegoke, explained that the backbone of any country is the youth and that any country that refuses to sustain it will not only fail but will also fall. “Kidnapping started because Federal Government then, failed to address an important issue which make it spread like a wild fire that no one is safe again. Look at what the youth, the future of this country have turned to all in the name of earning a living.

“Sometimes ago, it was ladies pants they were stealing, now, majority of them are into robbery, they are also being paraded on a daily basis as internet fraudsters. Most of them are frustrated because of the believe that government at all levels have failed them. That is why South Africa country will continue to kill and maim Nigerians because they understand that the Nigeria government do not bother about her citizens.

“Everybody knows that of a truth, no place like home but when home is becoming an easy way to the grave, it is better to seek refuge elsewhere. How many of the political class have their children in the country? Yet, they are discouraging others from seeking greener pastures in other countries. They only remember the youth during election when they are given peanut to buy their votes. Unless the Federal Government provide jobs for our youths, it will be difficult to address menace of kidnapping and other social vices in the country.”

Reacting differently, an educationist, Mrs Yemisi Ogunleye opined that the only solution to rising cases of kidnapping in the country is death penalty. “Let it be passed into law across the country and be implemented accordingly for just six months and see if it will not address the problem. Kidnappers can only desist from the evil act when those caught pay with their lives. Taking the bold step will serve as deterrent to others.”

The Federal Government has tarry on this junction hence, the need to be proactive to make our highways free of evil perpetrators. Most highways have become kidnappers hide-out that people are always scare travelling. This cannot continue, we need government intervention.

“Government should stop dragging their feets on this serious issue that is fast becoming the order of the day and take urgent action against it to save innocent souls. It is abysmal failure on the part of government if strigent measure cannot be put in place to secure citizens lives and property. You cannot continue to do the same thing, same way and expect a different result. Even in the judiciary system, there is no strong whip against kidnapping. If I see that someone commit a crime and get away with it, there is already attraction  in the business. If kidnappers face death penalty, others we learn. It is high time the Federal Government stop treating kidnapping issue with kids glove because many victims have been sent into their early graves. The fact that things are tough is not enough reason to kidnap ordinary people who are also struggling to survive for ransom many of whom were killed even after paying the ransom. Making kidnappers to face death penalty will go a long way to address the ugly trend and other social vices in the country.”