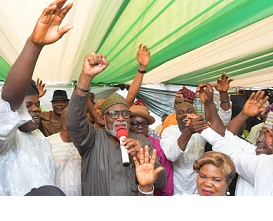 From Fisayo Akinduro, Osogbo
|
Prince Olu Adegboro has been appointed as leader of All Progressives Congress (APC) in Akure South Local Government Area of Ondo State.

Adegboro was appointed yesterday at the meeting of leaders of the party in Akure South Local Government.

The well attended meeting was held at Adegbola office of the formre commissioner for Information.

Moving the motion for adoption of Prince Adegboro as leader, Prof Olu Aboluwoye described Adegboro as a leader per excellence.

Mr Femi Bello seconded the motion and was unanimously adopted by all leaders present at the meeting.

Speaking with The Hope on phone, Prof Aboluwoye said the new APC will serve as a rally point for all the party leaders including political office holders in the local government.