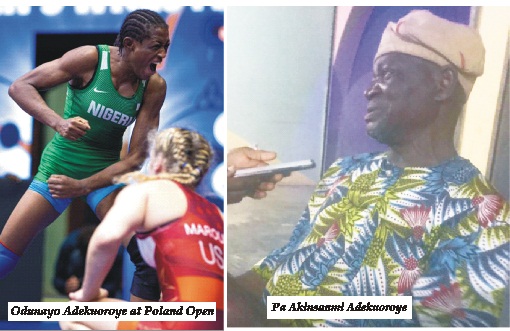 My daughter was frustrated out of track and field event before she became a Wrestler in 2006,” the father of Olympics bound Odunayo Adekuoroye, Pa Akinsanmi Adekuoroye has disclosed.
In an exclusive interview with Sporting Hope, Pa, Akinsanmi said her daughter was 100/ 200metres sprinter before she was sidelined during the preparation for Gateway National Sports Festival held in Ogun State in 2006.
He said Odunayo started her Wrestling career with 49 kg and won bronze for Ondo State in her first outing in Ogun State as SS II student.
She ran home with the N50,000 that was given to her as bronze medalist winner at Gateway National Sports Festival, by the late Governor Dr Olusegun Agagu for us to pay her siblings tuition fees.
She just won another gold at the Poland Open,while her compatriot Blessing Oborodudu settled for silver at the Ranking series tournament in Warsaw.
Pa Adekuoroye said his daughter was to represent Akure South at the Ondo State Sports Festival which they were using as preparation for the National Sports Festival then, as a secondary school student, she competed in 100metres and came first, but the people in charge had already had their preferred candidate for the competition.
According to him, “they said they were repeating the race, at the repeated race, she also came first, at this point they cancelled the race and put in their candidate, this frustrated her that she couldn’t come home. She just hanged around the stadium in frustration, until coach Sola saw her and asked her if she want to become a Wrestler which she agreed to.
“She was immediately allowed to join them in training, she defeated her opponent in first training, without a twinkle of an eyes she became the toast of the coach, within two weeks she followed them to the Gateway National Sports Festival and was the only lady that won bronze medal for Ondo State in Wrestling at the festival.
“Since then, she has been winning medals both local and at the international competitions.”
Pa Adekuoroye said, “I’m a footballer and long jumper to the level of academical in those days, I played along side Tunde Ogunja then, because of this I encourage all my children to make use of their natural talents.
He said on Odunayo, “I almost stopped her from doing sports, especially when it comes to combat sports like Wrestling, because she used to have nose bleeding as a small girl,so I think that may aggravate the bleeding, but as God will have it, since she became a Wrestler we the bleeding stopped”.
Pa Akinsanmi added “that he used his experience to stop her from leaving Ondo State to other states, when she was not well treated, despite her exploits for the state, at her level she can’t get accomondation, some times we hustle to treat her when she sustain injury, thanks to Dr Olukoya he has been so good to us.
“When she told me her experience that she want to leave the state,that they placed some sports over other, that her dues wasn’t given to her .
“I told her not to leave her state of origin, that it will be treated well by her adopters at the beginning but as time goes on, it won’t be the same, and that if she is not recognized today that God will bring somebody that will recognize her one day.
“Also in her secondary school she faced lots of frustration from the school, management, because they didn’t believe she could do anything within two weeks of joining the wrestling, she was not allowed to write WAEC and almost denied from writing NECO, thank God she wrote the NECO and made her result at one seating.
I want to admonish other parents to encourage their children to participate in any sports they like, we should not discourage them by hiding their God’s talents,”he said.